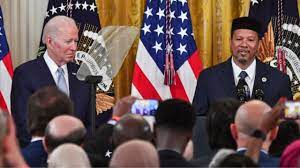 Muslim elected officials from Minnesota attended a celebration at the White House for Eid al-Fitr, a tradition that was scrapped under the previous administration and revived by President Joe Biden on May 2.

Biden invited hundreds of Muslim government leaders, members of Congress, state and city government officials, diplomats, and advocates from across the country for the in-person festivities. Among them was Minnesota Representative Mohamud Noor (DFL-Minneapolis), who attended Eid at the White House for the first time.

“It shows that we have overcome some challenges,” he said. “We should continue to thrive as Muslims, as being part and parcel of the United States.”

When he entered the reception room, Mohamud was greeted by music and staff who remarked, “Eid Mubarak,” an Arabic term that means “Blessed holiday.” Mohamud attended the celebration with Representative Hodan Hassan (DFL-Minneapolis).

Hamse Warfa, a senior adviser to the State Department and former Deputy Commissioner for the Minnesota Department of Employment and Economic Development, was also at the event. U.S. Representative Ilhan Omar celebrated Eid in Minneapolis but met with Biden over the weekend.

“Today, we celebrate the incredible stories of the indispensable contributions of Muslims all across this great nation,” President Biden said. “Muslim-Americans, a diverse and vibrant part of the United States, making invaluable cultural and economic contributions to communities all across the nation.”

Mohamud said he appreciated hearing the president commend contributions made by Muslims, such as a Muslim scientist who helped develop the COVID-19 vaccine. Biden also told the attendees he appointed Rashad Hussain as the first Muslim to serve as U.S. Ambassador-at-Large for International Religious Freedom.

“After many years of being neglected, rejected, ostracized, and called names as Muslims,” Mohamud said, “it was time to see a commanding chief who actually shows respect for the Muslims in the country.”