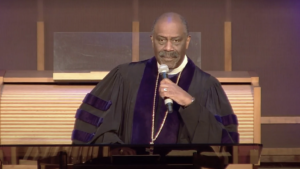 A group of New York clergy took more than a million dollars from a real estate developer who sought to turn distressed Black churches into lucrative properties, according to settlements with that state’s attorney general.

The settlements, posted on the attorney general’s website in August, show that a bishop, two pastors and a pastor’s wife sought to conceal the kickbacks from congregations that owned the buildings, as well as from state officials. The funds were taken even as the developer, Moujan Vahdat, allegedly failed to live up to promises made to the churches in the purchase agreements. In one case, Vahdat is accused of trying to evict a congregation from the building it once owned.

Two African Methodist Episcopal Church clergy involved have agreed to pay back more than $800,000 to the state of New York, according to the settlements. Vahdat has signed a settlement with the attorney general, offering to make good on his company’s promises to the churches or allow them to back out of their deals.

Retired AME Bishop Gregory G.M. Ingram, who formerly oversaw the First Episcopal District of the AME, which covers much of the northeast U.S., agreed to pay back $600,000 in “finder’s fees” he got from the sale of the church properties. The bishop also agreed to sell a Rolex he got as a kickback. Former First Episcopal District Presiding Elder Melvin Wilson, who worked for Ingram, agreed to pay back $300,000.

News of the settlements led the AME’s Council of Bishops to condemn the actions of their clergy colleagues. That condemnation came after the settlements, which were signed in 2021, were made public in late August, according to the bishops.

“As a result of the findings of the Attorney General of New York and the signed agreement of the two AME clergypersons, the Council of Bishops of the African Methodist Episcopal Church expresses our disappointment and condemns the inappropriate practices of our colleague and the former presiding elder in the New York Conference, who currently pastors in the New Jersey Conference,” the AME Council of Bishops said in a statement dated Aug. 31.

The Council of Bishops also announced that Ingram, though still listed as a bishop on the AME’s national website, will refrain from taking part in bishop meetings or other denominational events until 2024. Any further discipline against Wilson will be decided by the new bishop of the First Episcopal District.

Neither Wilson nor Ingram responded to requests for comment.

According to the settlements, Vahdat allegedly gave a Church of God in Christ pastor and his wife hundreds of thousands of dollars in kickbacks for the sale of the historic Childs Memorial Temple COGIC in Harlem. That pastor and his wife are not named in the settlements. However, in 2021, the New York state attorney general sued COGIC pastor Kevin Griffin, saying he had allegedly received $900,000 from Vahdat, including $450,000 from the sale of Childs Memorial.

In an affidavit filed in February, Griffin, who denies any wrongdoing, said he took no part in the vote to sell the church. He also said that he might receive finder’s fees from the developer for other church sales.

The settlements with the attorney general’s office cover the acquisition of seven churches — five from the AME and two from COGIC — beginning in 2013. Vahdat’s companies purchased six of the churches and obtained a 99-year lease on one of the buildings. The idea was to take over older church buildings that were already heavily leveraged, according to the settlements. Those buildings would then be demolished and replaced by multistory buildings, which would contain a sanctuary for the church to worship in, with the rest controlled by the developer.

Vadhot enlisted the aid of clergy to identify and secure the buildings. This was complicated by state law governing the sale of church buildings, which is highly regulated. According to the settlements, any sale must be approved by a state court or by the attorney general’s office.

Six of the church sales had been through the approval process. However, the attorney general’s office then became aware that the documents used to gain approval had been altered afterward. That led to an investigation which found that Ingram and Wilson had used their leadership positions for personal gain, shepherding the sales through the approval process, which required a vote by the congregation’s leaders, the local district and the statewide annual conference, led by Ingram.

Before his retirement in 2020, Ingram played a prominent role in the AME, serving as host bishop for the denomination’s 200th anniversary.

As church leaders, Ingram and Wilson were charged with protecting the church property —which according to AME rules is held in trust for the denomination. New York state law requires that nonprofit leaders recuse themselves from any transactions in which they have a personal interest.

According to the settlement, Ingram misused his authority because he “authorized or caused to be authorized what were supposed to be arms-length sale transactions to the Developer with full knowledge of the personal financial benefits he was receiving from the Developer at the same time.”

Wilson turned down a job offer from Vahdat, according to his settlement, saying that staying in his leadership role at the church would be better.

“My thought is that it would be more beneficial TO YOU for me to continue working as a Presiding Elder/Minister, because this position and title gives me entree’ into many places,” he wrote in an email to the developer quoted in the settlement.

Ingram agreed to pay back $610,000, including an initial payment of $120,000 and the remaining amount due by 2023. Vahdat also agreed to fulfill his contractual agreements with the churches or allow them to back out of their contracts.

The two are barred from holding leadership positions in any nonprofit but can remain as ministers under the settlements.

All the settlements, which were signed in 2021, remain in force, according to a spokesman from the attorney general’s office.

A former bishop in the African Methodist Episcopal Zion Church — a separate denomination from the AME — was indicted early this year in connection with $14 million in alleged fraud from the sale of church buildings. Staccato Powell was “disrobed” in a 2021 church trial for allegedly altering church deeds and transferring them to an entity he controlled.