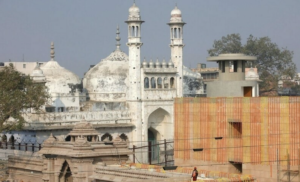 An Indian court has upheld the maintainability of a petition filed by Hindu women seeking permission for worship in one of the country’s highest-profile mosques, multiple Indian media outlets reported on Monday.

Varanasi city’s Gyanvapi mosque, located in the constituency of Prime Minister Narendra Modi, is one of the several mosques in northern Uttar Pradesh that Hindu hardliners believe — in common with some other religious sites — was built on top of demolished Hindu temples.

In May, India’s Supreme Court had overturned a local order to ban large Muslim prayer gatherings in the mosque after a survey team said it found relics of the Hindu god Shiva and other Hindu symbols there.

The Supreme Court order had come a day after a local Varanasi court ruledthat Islamic gatherings in the Gyanvapi mosque should be limited to 20 people. The local court had ordered the survey of the mosque after five women sought permission to perform Hindu rituals in one part of it, saying a Hindu temple once stood on the site.

The Anjuman Intezamia Masjid Committee had subsequently filed an application against the maintainability of the plea by the Hindu litigants, arguing that it violated the “Places of Worship (Special Provisions) Act, 1991, which states that the religious character of a place of worship as it existed on August 15, 1947 cannot be changed”, the Scroll reported.

The report added that the district judge had reserved his verdict on the application last month.

In its verdict on Monday, the court announced that the law could not prevent the Hindu litigants from worshipping in the mosque’s grounds since they were offering prayers there even after Aug 15, 1947.

According to the report, the judge also noted that the litigants had not demanded the conversion of the mosque into a temple.

“The plaintiffs are only demanding right to worship Maa Sringar Gauri and other visible and invisible deities which were being worshipped incessantly till 1993 and after 1993 till now once in a year…” the report quoted the court order as saying.

The Hindustan Times reported that the next case hearing is on September 22.

Speaking to The Wire, SM Yasin, the general secretary of the mosque committee, said, “We are waiting for the final order, our next logical step will then be to approach the high court.”