Punjab proposes declaration on finality of Prophethood before Muslim marriage 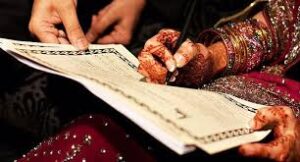 In what appears to be a bid to win over the right-wing vote bank, the Punjab cabinet on Tuesday approved an amendment to the West Pakistan Rules under Muslim Family Laws Ordinance 1961, and subsequently included a clause wherein couples intending to get married would have to take an oath to testify their belief in the finality of Prophethood (PBUH) at the time of nikah.

While the intentions of the provincial rulers aren’t clear, some of the analysts are of the view that it is another move to malign and push the Ahmadiyya community against the wall. Some civil society and legal fraternity question the objectives behind such an amendment when the law and Constitution already contain relevant provisions and clauses about faith.

Lawyer Asad Jamal wondered why Punjab was taking a solo flight when the Muslim Family Laws were not a provincial subject. “They should rather propose any change to the Centre and justify that the nation will collapse if such a move is not made. Is the religion under some special threat in Punjab? The right-wing movement is indeed strong in the Punjab Assembly, and may not even face resistance because people will be scared to talk about it.”

He maintained that every Muslim believed in the finality of Prophethood (PBUH), and questioned if the cabinet thought some people were lying about their faith. “Such legislation is usually done in mischief unless there is evidence to support the need for it. It’s like the blasphemy law was amended in the 1980s without evidence that the Muslim faith was under any threat.”

The senior lawyer said such declarations were already required for identity documents like ID card and passport, so “aren’t the present laws and Constitution enough? What safety could such proposals ensure? This is just playing politics on religion and religious sentiments”, Mr Jamal remarked.

Lawyer and women’s rights activist Nighat Dad was surprised why such an oath would be required when couples wouldn’t be holding a public office, and echoed Mr Jamal’s views about identity documents already containing such declarations. “The identity documents for every citizen of Pakistan already require such an oath and when a person isn’t assuming a public office, why would this be required? Religion or belief is a personal choice anyway, so why take an oath to declare it before marriage or anything for that matter?”

She explained that Pakistani Muslim Family Laws were very clear about marriage, nikah and any problems arising after it, so there was no need for such an oath. “The nikahnama contains all the relevant clauses already, so this appears unnecessary,” she added.

Bushra Khaliq, the executive director of Women in Struggle for Empowerment, maintained that the state institutionalising a personal matter like marriage would make religion a much more sensitive issue than it already is in the region. “We’re very sensitive and emotional about religion and become reactionary, which often discriminates against others’ rights and endangers lives. If we make declaration of faith a prerequisite for marriage, the sensitivity of the issue will increase. This can also lead to further discrimination against and isolation of religious minorities.”

Ms Khaliq believed such moves will also be contradictory to the spirit and vision of Quaid-i-Azam Muhammad Ali Jinnah, who propagated the freedom to practice any religion. “Discrimination is already normalised here and feels like a routine. Instead of introducing progressive laws, such decisions will make it difficult for couples who don’t want to reveal their faith. Marriage doesn’t need to be given a constitutional cover; this will increase the sensitivity, divisions in society, biases and lead to further discrimination,” she concluded.