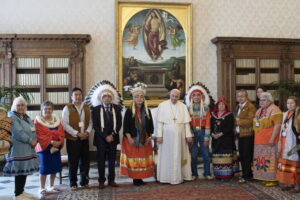 “I am deeply sorry,” the Pope said on the grounds of a former residential school in Maskwacis, near Edmonton.

He said his apology is the first step, and that a “serious investigation” into abuses must occur to foster healing.

The pontiff is in Canada to apologise for the Church’s role in schools meant to assimilate indigenous children.

The government-funded schools were part of a policy meant to destroy indigenous cultures and languages.

The papal apology was received by applause from survivors in the audience, some of whom travelled far to hear the Pope speak.

Pope Francis expressed “sorrow, indignation, and shame” for the actions of many members of the Roman Catholic Church, who ran and operated the majority of residential schools in Canada.

The 85-year-old Pope called the school system a “disastrous error” and asked for forgiveness “for the evil committed by so many Christians” against indigenous peoples.

Bruce Allan, a survivor of one of the residential schools who were in attendance, said it was emotional to hear the Pope’s apology, but many are still looking for action from the pontiff.

“I think probably a lot of survivors are quite angry still,” Mr. Allan told the BBC.

The Pope said he traveled to Canada with a small pair of moccasins gifted to him by an indigenous delegation in the Vatican earlier in the year.

The moccasins, which the Pope was asked to return, serve as a symbol for the children who attended residential schools and never came home.

He said the moccasins also “speak to us of a path to follow”, – that of justice, healing, and reconciliation.

His remarks were heard by indigenous chiefs who gathered at Muskwa Park alongside First Nations, Métis, and Inuit residential school survivors.

Prior to his remarks, the Pope met privately with leaders at the local church and led a silent prayer at the Ermineskin Cree Nation Cemetery, where there are marked – and likely unmarked graves – of residential school students.

After his apology, the Pope wore a traditional headdress gifted to him by an indigenous leader as a Cree donor song was sung in the background.

The former site of Ermineskin Residential School, one of the largest in Canada, is the Pope’s first stop on his trip – one the pontiff has called “a pilgrimage of penance”.

Many have called on the Pope to apologise for the role the Roman Catholic Church played in operating up to 70% of residential schools in Canada.

The schools operated from the 1870s, with the last one closing in 1996. In that period, around 150,000 First Nations, Métis and Inuit children were taken from their homes and placed in those schools.

In a landmark 2015 report by Canada’s Truth and Reconciliation Commission, survivors spoke publicly about being subject to abuse, illness, and malnutrition at residential schools.

More than 3,000 students are thought to have died at the schools. The TRC report called the residential school system a central element of “cultural genocide” against indigenous peoples of Canada.

The Pope’s remarks on Monday come at the heels of a historic apology made in April to an indigenous delegation in the Vatican, saying the residential schools caused him “pain and shame”.

The Pope returns to Edmonton in the afternoon, where he will visit the Sacred Heart Church of the First Peoples, the first national parish for indigenous peoples in Canada.

He is scheduled to make other public remarks throughout his trip.