How Americans Influenced Every Aspect of Saudi Life 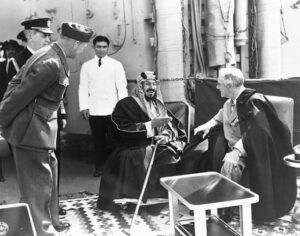 In a memorandum dated October 9, 1945, under-secretary of state Dean Acheson drew President Harry S Truman’s attention to Saudi Arabia’s oil resources. He called them a stupendous source of strategic power, and one of the greatest material prizes in world history. Acheson said a concession covering oil is nominally in American control. He warned it will undoubtedly be lost unless their government is able to demonstrate ‘in a practical way its recognition of this concession as of national interest. Acheson recommended acceding to the reasonable requests of Saudi King Abdul Aziz Ibn Saud for temporary assistance to overcome economic and financial difficulties until the exploitation of the concession begins to bring substantial royalties to Saudi Arabia.

The memorandum came in the backdrop of the American inability to grant Ibn Saud loans of about $10 million annually as long as revenues began to accrue from petroleum development projects. Acheson noted this money annually for five years would be necessary to obtain economic stability in Saudi Arabia to give reasonable security to American interest in the vast Arabian oil fields for ‘winning peace’ in a crucial part of the world. Months earlier in February 1945, Truman’s predecessor, Franklin Roosevelt, met Ibn Saud, onboard a warship anchored in the Red Sea as the US President looked for allies following the Second World War that led to American emergence as a superpower. Roosevelt’s advisors and oil explorers also pushed him to befriend the al-Saud dynasty founder before the British for oil.

Ibne Saud would soon give concessions to American oil companies in exchange for a military alliance to protect his fledgling Kingdom from the rival Hashemite tribe. America’s post-war policy of acquiring oil resources for its safety and security made Saudi Arabia indispensable for Washington. The alliance between the two countries has endured since despite American commitment to exporting democracy and its total absence in Saudi Arabia, which is named after the ruling family and governed in alliance with clerics. Ibne Saud laid the foundations of the tie-up despite American failure to keep its pledges over the Palestinian issue visa-a-vis Israel’s creation. He took flak for choosing personal and family interests over the interests of the ummah, whose natural leader he claimed to be by virtue of being the ruler of the areas housing Islam’s holiest places.

Saudi Arabia has continued to follow Aziz’s pragmatism over emotional religiosity to further its interests closely tied to the US. It secretly continued oil supplies to the US and refused to sever ties with it after the 1967 and 1973 Arab-Israel wars. America’s thirst for oil and the security it offers Saudi rulers to maintain their power cemented the alliance. Saudi Arabia provides 12% of the estimated 19 million barrels of oil that the US consumes daily. It has long adjusted international oil prices to suit US interests. Riyadh reportedly increased its production to drop prices to help Barack Obama in his re-election campaign as he faced flak over gasoline prices. Saudis unsuccessfully tried the same to help President Carter in his 1980s re-election campaign.

It has not, however, been about oil-for-security alone. According to author Thomas Lippman, Americans ‘have had a formative influence on almost every aspect of contemporary Saudi life except religion.’ Americans first went to Saudi Arabia looking for oil. But they have over the years become involved in Saudi’s economic development, governmental restructuring, foreign policy, and infrastructure development. Saudi Arabia got further intertwined with the US in the 1980s when it signed an agreement to invest its petrodollars in America. This was done to avoid the repeat of the 1970s oil shock due to the oil embargo and growing American realisation that Arab states could effectively use oil as a weapon in the future as well. The agreement has ensured that Saudis have an estimated trillion dollars deposited in American banks. This along with American corporations’ massive investments in Saudi Arabia has strengthened cooperation. The US Treasury Department has the Office of Saudi Arabian Affairs, the only such arrangement with any country.

Common foes such as secular Arab rulers and communism, too, have contributed to the relationship. President Dwight D Eisenhower promoted the Saudi king as Islamic pope in the 1950s to counter Egyptian Pan-Arabist Kamel Abdul-Naseer, who tried to unite Arabs and challenged US-backed despotic regimes such as Saudi Arabia with the Soviet help. The depth of the relationship is perhaps best illustrated in then crown prince Faisal’s conversation with US ambassador Parker T Hart in which he told him that ‘after Allah, we trust America’ while the kingdom was involved in a confrontation with Egypt over Yemen in 1963. Faisal, who took over as the king the following year, told Hart that he has considered the interests of his country, community to be the same as those of the US.

Saudi Arabia’s importance for the US increased after the 1979 Iranian revolution overthrew the Shah who was installed after an American Central Intelligence Agency-backed coup removed democrat Mossadegh for nationalising oil and ending British monopoly over it in 1953. Ibn Saud’s son, King Fahd, pumped money into anti-Communist campaigns in places such as Afghanistan in the 1980s. The first Gulf War a decade later was the highpoint of the relationship when Saudis assisted the US and allowed 500,000 American soldiers in the land of Islam’s holiest places to end Saddam Hussein’s occupation of Kuwait and stop him from advancing towards the Kingdom’s oil-rich provinces. A leading cleric issued a fatwa legitimising the war and presence of American troops. Dissident clerics were imprisoned, while Osama bin Laden declared war on the Saudi ruling family over the American presence after he was stripped of his citizenship and forced into exile.

The 9/11 attacks briefly strained the ties as most of the attackers were Saudis. But the ruling Saudi clan’s known proximity to the Bush family, which has given the US two presidents, ensured evacuation of the bin Laden family members and other Saudi notables from the US within 48 hours of the attacks while the air traffic was suspended. The Second Gulf War, which led to Saddam’s removal and the installation of a pro-Iranian government in Iraq, was another irritant in the ties that the two countries have since managed to repair.

The signing of American history’s biggest arms’ deal worth $60 billion to sell military equipment to Saudis in 2010 underscored the thaw in the ties. The deal created much-needed jobs in an ailing US economy and strengthened the bilateral cooperation against Iran besides ensuring Riyadh’s dependence on Washington for training and maintenance of these weapons for decades. Saudi Arabia has the world’s largest defence budget and spends a bulk of that on US weapons. The US has reciprocated by turning a blind eye to uprisings in Saudi Arabia’s eastern provinces, its role in crushing anti-monarchy demonstrators in Bahrain, and most recently its military campaign in Yemen. Democracy in Saudi Arabia does not suit the US for the fear of losing another dependable ally and the paradoxical special relationship between the two diametrically opposite countries – one a champion of liberty and another absolutist monarchy – is here to stay.

Sameer Arshad Khatlani is an author-journalist based in New Delhi.