Dialogue to help persecuted Christians in Pakistan, other countries 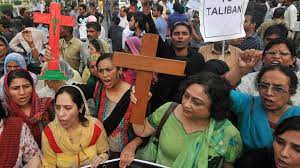 In 1980, a Lutheran and a Catholic bishop in Vienna founded an ecumenical organization to help Christians persecuted worldwide.

Christians in Need offers homes to the displaced, scholarships for women to study in countries where they are persecuted, and builds schools and orphanages securing a future for hundreds of children.

The secretary general of the organization, Dr. Elmar Kuhn, and the deputy secretary-general, Martin Morawetz, were in Rome last week, hosted by Father Robert McCulloch, the board chairman of the St. Elizabeth Hospital in Hyderabad, Pakistan. Christians in Need plays a key role in financing the School of Midwifery that is attached to the hospital.

“The main reason we came here is to see what more can we do in Pakistan in the future, finance education, provide aid to poor families, and continue working in this rural region where thousands work in slave-like conditions under the ruling of Muslim landlords,” Kuhn said. “They have no other medical aid, and women have no access to education, suffer from all forms of sexual misuse and basically have no future other than suffering.”

Securing access to a medical facility that can help not only with the physical health of people but also meet their mental health needs, he said, is the “first step to make the burden a little lighter.”

Not content with just one step, Christians in Need is working on training some of the women who live in this rural area as midwives and providing them with tools for self-growth so that they can in turn help other women.

“The question is, how do we help these women understand that their God-given dignity makes their life worthwhile, that they weren’t born for sweeping the floors and the streets for men,” Kuhn told Crux. “An education will provide them with the freedom to make their own decisions, and grant them the opportunity to be proud of themselves.”

Educating women of all faiths in trades with which they can make a living – midwifery, hairdressing, and so on – is one of the core concerns for the NGO, particularly as it focuses its work in many Muslim-majority countries where women don’t always enjoy access to an education.

Christians in Need fights for religious freedom and religious peace, promoting the co-existence of Christians, Muslims, Hindus, Yezidis, and the Baha’i with projects in Iran and Iraq.

The group works to promote mutual respect as a tool of peacebuilding, and argues that religions are part of the solution to conflict, not the cause.

Speaking both in English and Spanish – Kuhn was actually a Jesuit seminarian for a time, studying in Buenos Aires Colegio Maximo in the 1980s, when then-Father Jorge Mario Bergoglio (Pope Francis), was the rector of the institution – he said that the problem of religious freedom in Pakistan has much to do with the “split” system of a modern, democratic, functional legal system in major cities, but a very rural, “stone-age” Islamic systems in the small villages.

In the rural areas, he argued, “education is needed so that they can understand that humanity is not only limited to Muslims, and that Muslims are not better humans than Christians or Hindus.”

Kuhn argues that Christians “have no right to judge their actions and beliefs, because it is not too different from what we did in the Middle Ages with the Inquisition. We needed some education, some secularism, to rethink what we were doing.” This centuries-old experience, he said, does mean that “we have the right to tell them ‘we were where you are, we can help you better understand what you are doing’.”

Freedom of religion is guaranteed by the Pakistani constitution, but the reality on the ground shows that religious minorities often face significant discrimination, and face violence and persecution through the country’s controversial blasphemy law.

Only four percent of the total population is non-Muslim, but that amounts to over eight million people.

“Where we can help is in education,” Khan said. “Today, the Islamization begins in schools. They are forcing Hindu and Christian people to take part in Islamic education, and all the prejudices against non-Muslims are present in the school books.”

He acknowledged that there are also extremist Christian movements, particularly among the free churches, that cherry-pick Bible quotes to justify their actions, much like fundamentalist Muslims do with the Q’uran. Yet, to him, this is another example of the need to guarantee access to quality education for all, with the idea that all are equal being at the core of the curriculum.

“I see the errors and problems in Islamic history, as I do in the Christian/Catholic history,” he said. “But if we always talk about the mistakes of yesterday, we will never have a clear perspective for the future. We need to continue working together, for our society, our children, our future.”

“Today we have great opportunities of dialogue, and in most of the world, Muslims want nothing more than to live in peace, and we are carrying out this dialogue with all religious, because we believe that together, we have the power to influence our societies, because spirituality is needed more than ever,” Kahn said. “We find really good partners.”

The problem, he said, is that in places like Saudi Arabia, Yemen and rural Pakistan, people are very far away from the places where this dialogue is taking place.

The education programs financed by Christians in Need in partnership with local clergy and religious – Catholic and non-Catholic – are open to everyone: Christians, Muslims, Hindus, all working together.

He highlighted one of the group’s program in Egypt. In pockets of that country, extremist branches of the Muslim Brotherhood want to implement a Sharia law that is incompatible, not only with democracy, but also with human rights, freedom of thought, and women’s rights.

“We have several strong education programs open to everyone,” Kahn said. “And it always starts the same: We are accused of being proselytists, imperialists, and colonialists for being Christians. But we have a great priest in Egypt, who works incredibly hard in providing an education for disabled children, who are often treated as cattle in these parts of the world. It took him half a year to convince the parents of these children that they would not be converted to Christianity.”

When people see the improvements in the lives of the children – and of the women who learn trades – and that there is no proselytism, “the propaganda of the Muslim Brotherhood loses its influence,” he said.

With a yearly budget of close to 1 million dollars raised with the help of individual donors, Christians in Need can do things like helping 100 families relocate to a safe area after a devastating event, preventing them from ending up in a refugee camp, that more often than not ends up being a “temporary solution that lasts for a generation.”

For instance, the group has helped an entire village in Nigeria relocate, following a series of violent attacks by Fulani headsmen. It has also built both an orphanage and a school to help secure a future for the children while freeing the parents to look for work.

“When we help, we give aid for people to start a new life, and then we go,” he said. “We don’t feed them for 20 years, making them dependent on aid. And the fact that they are then able to stand on their own feet gives them a sense of pride, dignity. We have several projects that have shown that it is possible to change someone’s future, even when they have been discriminated against and persecuted.”