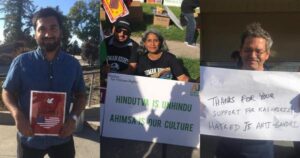 A Democratic Par­ty unit in a New Jersey town has pas­sed a resolution calling out the US-based Hindutva outfits as “domestic bran­ches” of “foreign hate groups”.

The resolution named several right-wing Hindu groups — such as the Hindu American Foundation (HAF), the Vishwa Hindu Parishad of America (VHPA), SEWA Interna­tional, Infinity Foundation and Ekal Vidyalaya Foundation — among the outfits that practise Hindu supremacism in the United States.

Passed by the Teaneck Democratic Municipal Committee (TDMC) this week, the resolution urged US senators and congressmen from New Jersey, and Governor Phil Murphy, to ask the Federal Bureau of Investigation (FBI) and the Central Intelligence Agency (CIA) to “step up” research on these “foreign hate groups that enjoy “tax-exempt status” in the United States.

“Hindu nationalist organisations have infiltrated all levels of politics and were highly effective in blocking US House Resolution 417 which was a congressional attempt to warn against the Hindu nationalist movement,” TDMC said.

House Resolution 417 — brought in 2013 in the US Congress — sought to continue denying a US visa to Indian Prime Minister Narendra Modi, which was sponsored by both Republican and Democratic lawmakers. The resolution also called on India to protect the rights and freedoms of religious minorities and asked the US government to include the matter as part of the bilateral strategic dialogue.

The TDMC resolution noted that “most local American elected officials remain unaware and unprepared to deal with the Hindu extremists”.

The resolution claimed that US-based right-wing Hindu groups had “direct and indirect ties to Rashtriya Swayamsevak Sangh (RSS), the right-wing Hindu nationalist paramilitary organisation in India whose ideology are part of Nazism and European fascism.”

The resolution urged New Jersey Senators Bob Menendez and Cory Booker and Congressman Josh Gottheimer to “revise the Visa Waiver Programme Improvement and Terrorist Travel Prevention Act of 2015 to address foreign violent extremists with speaking engagements in the US”.

In 2005, Modi, then the chief minister of Gujarat, applied for a US visa but his request was turned down because of his failure to halt the 2002 riots that killed about 2,000 Muslims and destroyed livelihoods and homes in the Indian state. In 2016, the Obama administration used waiver facilities to restore his visa.

The TDMC resolution noted that “extremists who routinely spew venomous hate towards minorities [in India] are invited to speak at large events and temples in the United States”.

The resolution pointed out that Sambit Patra, a “controversial” spokesperson of India’s ruling Hindu supremacist Bharatiya Janata Party (BJP), “served as Grand Marshall” at a parade held in Edison and Woodbridge towns on Aug 14 to mark the 75th anniversary of India’s freedom.

“A bulldozer, which has been weaponised against minorities” in India, was part of the New Jersey parade with “giant pictures” of Uttar Pradesh Chief Minister Yogi Adityanath as ‘Daddy Bulldozer’.

The resolution also pointed out that Hindu extremists sent “one million emails, death threats and rape threats to US academic scholars, like Rutgers [University] professor Audrey Truschke, and their families when 50 universities supported [a] conference titled ‘Dismantling Hindutva’ [in 2021]”.

The resolution said US lawmakers must help pass US House Resolution 1196 that urges the US Department of State to designate India as a Country of Particular Concern, as recommended by the US Commission on International Religious Freedom.

“Americans need to understand that the RSS’s roots stem from the same place as Italian fascism and German Nazism,” TDMC member Daniel Rosenblum, who voted for the resolution, told Indian American Muslim Council (IAMC), which was among the first to report the passing of the resolution.

Margot Fisher, another TDMC member, said: “People are confusing the teachings of Gandhi with Hindu nationalism and they are not the same.”

In recent weeks, several human rights organisations — such as Black Lives Matter, American Muslims for Democracy, and Hindus for Human Rights — led a campaign to raise awareness among elected officials in New Jersey about the dangers of Islamophobic Hindu supremacism.