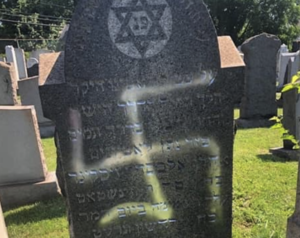 Ahad Ha’am, considered the father of “cultural Zionism,” is quoted as saying, “More than Jews have kept Shabbat (Sabbath), Shabbat has kept the Jews.”

Ha’am’s comment is a recognition of the cohesive power inherent in widely shared group traditions and tribal memories. Call it positive reinforcement.

But similar sentiments have been expressed about antisemitism’s influence on Jews. In short, do communal fears over antisemitism also keep Jews connected to this day? After all, the enemy of my enemy is my friend — even if I utterly reject my newfound ally’s particular expression of Jewish religion, politics or lifestyle. Call it negative reinforcement, if you will, but fear of persecution — and certainly death — is a powerful motivator of group cooperation.

Switching lanes now, here’s a journalistic question about antisemitism. Does giving antisemitism extensive coverage — warranted though it may be — prompt more antisemites to act out publicly? Does publicity embolden and thus spark potential copycat antisemitism?

I have no doubt that the current global upswing in reported antisemitic incidents — some deadly, some just irritating — requires heavy coverage.

Journalists have a responsibility to alert authorities to antisemitism’s illegal expression, to warn Jews about the dangers they face, and to try to educate those media consumers who know little about antisemitism’s impact and incubators.

This responsibility, of course, extends beyond Jews to coverage of all groups suffering discrimination or persecution. Hatred of Jews may be — as has been said — the oldest hatred, but all hatred is equally wrong and personally and communally destructive.

As journalists, we don’t just report the news. We help shape it — and civilization — by what we report.

As a publicly identified Jew, I want to know, for example, when antisemitic flyers are discovered in my town, Annapolis, Maryland, as they were recently — and not for the first time. I won’t soon forget witnessing a Ku Klux Klan rally — small as it was, with counter demonstrators outnumbering the half-dozen or so robed KKK members — outside the Maryland State House in Annapolis some 20 or more years ago.

Likewise, as a regular synagogue-goer —albeit via Zoom these past two years of coronavirus safety precautions — I want to know what tougher security arrangements synagogues and other Jewish institutions in the United States and abroad are instituting to avoid new incidents such as those that occurred in 2018 in Pittsburgh and earlier this year in Colleyville, Texas.

As a journalist, I also want to know about antisemitism in Europe, the Middle East and elsewhere so I may connect some dots to better understand and explain the extent and causes of contemporary antisemitism in my writing.

I want to know when Dutch universities succumb to anti-Israel agitation and decide that all staff must report any and all associations with groups that have Jewish or Israeli ties. Yes, I think anti-Israel sentiments are often a cover for antisemitism, but that’s a rabbit hole I’ll avoid for now.

I also want to know when French, British, Swedish or South African Jews report strong upticks in public antisemitism. As a traveler I want to know what destinations are rife with antisemitic attitudes for my own safety — and because I prefer to not spend my money where Jews are considered a lesser breed.

But I also think this column by The Forward’s national editor, Rob Eshman, bears attention. His admission of hesitancy about the coverage of antisemitism is an age-old journalistic quandary because publicity — which is both empowering and addictive — does motivate others to follow suit. Here’s a link to his recent column. The opening:

Should I even write about the Goyim Defense League, and if so, how?

That question pops up every time the group does, which has been often. Last week (early February) its flyers blaming Jews for COVID appeared in the East Bay city of Danville. The week before, the same flyers littered San Francisco’s upscale Pacific Heights neighborhood.

This week at least one of them appeared in Toronto, tagging along with the anti-vaccine mandate truck convoy.

I know this because each time it happens, coverage follows in the local and Jewish press, and in countless social media posts. A toxic ecosystem has developed in which the flyers feed the press, which brings notoriety to the flyer-makers, who make more flyers.

In organic gardening you call that a closed loop. Of course, in this metaphor, the flyers are the manure. But who are the gardeners?

The uncomfortable answer is that social media and legacy media, including the Jewish press, are instrumental in spreading the manure and planting these seeds of hate.

The more attention and money the people behind the flyers get, the more uneasy the targets of the hate speech feel.

Eshman went on to note that, to date, the Goyim Defense League — that’s a curious name they’ve chosen — has been responsible for distributing antisemitic flyers in both southern and northern California, Alabama, Colorado, Idaho, Illinois, North Carolina, Vermont and Texas. In many cases, the flyers were tucked into plastic bags that were weighted with dry beans or rice, he wrote.

Eshman — in my opinion one of the best journalists currently working for American Jewish media, who formerly edited the Los Angeles Jewish Journal — quoted the Anti-Defamation League’s description of the GDL as “a loose network of individuals connected by their virulent antisemitism” including “five or six primary organizers/public figures, dozens of supporters and thousands of online followers.” He added:

There’s only one way a small number of people who spend their precious earthly hours filling plastic bags with beans, rice and B.S. can get an enormous amount of attention: media.

This disturbing fact came up at a Forward editorial meeting this week, as it should. News organizations big and small need to grapple with their role in amplifying hate and inadvertently helping hate groups grow. At the meeting, Jake Wasserman, our social media engagement editor, pointed me to a study by Whitney Phillips in the journal “Data and Society” that directly addressed this dilemma.

Hate groups, Phillips wrote, “don’t have the numbers to steer the cultural conversation on their own, and they should not be given any assistance, inadvertent or otherwise, in these efforts.” Extremist groups, Phillips points out, have become savvy “media manipulators,” using journalists to spread their message.

This is an especially fraught question for Jewish news organizations like ours, because the flyers are appearing amid an increase in violent antisemitic attacks and a consequent increased fear in our communities. We need to be able to uncover and report the facts behind the fear; to assess, not parrot, statistics; and to verify and provide context for stories, not simply echo them.

In the case of those ubiquitous flyers, they are simply no longer new news, and we need to be careful not to be the unwitting handmaidens to hate.

I have no doubt that antisemitism is a growing problem, again, some 80 years after the Holocaust. This applies to both left-wing and right-wing religious and political anti-Jewish agitators .

“Yes, antisemitism is very real, and yes it is impinging on our daily lives. … But even as it impinges on our daily lives, let’s never make it the raison d’etre, let’s never make it the motivation for our feelings as Jews. To let the haters turn us into just being on the defensive would be a victory for them. We’ve got to fight this fight but never let it become the determining factor in who we are.”

I agree, which is why I favor risking overreporting the antisemitism story rather than acting overly cautious and ignoring some of antisemitism’s less perverse expressions. Better to be on the offense. But it is not a decision to be taken lightly and without much thought.

Every newsroom — the virtual as well as the physical — needs this discussion. That’s particularly the case in this era of 24/7 deadlines and a plethora of media choices when grabbing eyeballs to somehow stay in the game seems to be the profession’s guiding principle.