Come to Jerusalem, see at least 12 messiahs every year 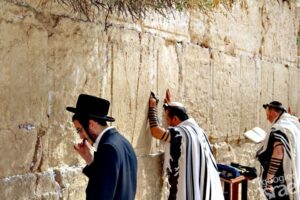 As Christmas approaches, Christians around the world turn to thoughts of the Holy Land and the great figures in the Bible.

For some who come on a visit, the religious energy is enough to make them recite scriptures on the street or claim to be King David or Jesus.

The phenomenon is known as the Jerusalem Syndrome, though psychiatrists disagree whether it can affect otherwise healthy people, or causes only those predisposed to psychoses to believe they have seen the Messiah.

The police set up a unit in the city — sacred to Jews, Muslims and Christians — to deal with the minority of tourists each year who believe they are characters from the Bible, and hospitals have special wards to treat wayward travelers.

During a walking tour of Jerusalem’s Old City in 2003, tour operator Avi Green said a 19-year-old American participant saw the stones of the Western Wall, one of Judaism’s holiest sites, open up and reveal the Messiah.

“He had a vision that the stones of the wall opened and the Messiah appeared and spoke to him,” Green said. “He became delusional and violent and had to be hospitalized.”

Between 30 and 40 tourists each year are admitted to hospital for similar behavior, said Dr. Gregory Katz, head of the emergency unit at Givat Shaul Mental Health Centre. Of those, only a few are diagnosed with “true” Jerusalem Syndrome.

“It’s extremely rare. It’s only Jerusalem Syndrome if the person has had no prior psychiatric problems,” Katz said. “It usually occurs on their first trip to the Holy Land. They see a meeting of the real Jerusalem and the Jerusalem from the Bible.”

Most patients are middle-aged with strong religious foundations, hailing from small towns in the United States or Scandinavia, Katz said. They are usually on organized tours with religious groups and develop a feeling of ecstasy when they see holy places mentioned in the Bible.

“Add jet lag and not sleeping for a few nights, and they begin to identify with biblical characters,” Katz said. “You might see them dressed in white and preaching at holy sites. Such behavior can be dangerous.”

Katz described the syndrome’s progression in an article published in the British Journal of Psychiatry in 2000. It starts with agitation and an urge to visit the city alone and ends with the need to don a toga and deliver a sermon at a holy place.

He described a 35-year-old woman from a Christian tour group who, after three or four days without sleep, believed she was the Virgin Mary. The woman walked out of her hotel room dressed in a white sheet and began preaching about not committing sins.

The episode lasts a few days, after which the person usually does not remember what happened, Katz said.

In 1986, Victor Wadhawkar helped form the Israeli police tourism unit to deal with foreign travelers. Whenever there was a report of a ranting tourist, his team was sent.

“We dealt with about a dozen delusional tourists a year … with a spike during Christmas and Passover holidays when more tourists walk around and visit holy places,” said Wadhawkar, who retired after working 14 years in the unit.

He told how several years ago, a woman in her 60s went missing during Passover when her tour group visited Jerusalem. Her frantic husband called the police.

“We found her the next morning in Bethlehem near (the biblical matriarch) Rachel’s tomb. She had walked through the night about nine km by herself,” he said. “She told us she didn’t remember a thing, only that she had gotten a sign.”

Other psychiatrists say Jerusalem Syndrome is not a disorder in itself but a manifestation of other psychoses.

“It’s not Jerusalem that made them psychotic. They have previous disturbances and the exhilaration (of Jerusalem) augments their behavior,” said Moshe Kalian, District Psychiatrist of Jerusalem.

In most cases, the delusional travelers came with a messianic mission in mind and Jerusalem was just a stage to act it out, Kalian said.

In two articles published in mental-health journals, Kalian recounts numerous cases of erratic behavior in pilgrims visiting Jerusalem from as far back as the Middle Ages. In most cases the travelers’ delusions began elsewhere.

He wrote: “The eccentric conduct and bizarre performance of those colorful yet psychotic visitors become dramatically overt once they reached the Holy City — a geographical locus containing the ‘axis mundi’ of their religious beliefs.”

One thought on “Come to Jerusalem, see at least 12 messiahs every year”