Ukraine and Palestine: How the West embraces one resistance but demonises another

Ukraine's defiance in the face of Putin’s aggression has been dubbed heroic, so why doesn't the Palestinian resistance get the same treatment? 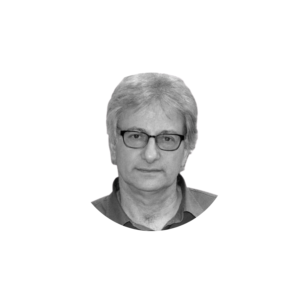 For the past two months, the West has been transfixed by the sight of a lightly armed population resisting the might of an overwhelmingly powerful and aggressive neighbour. Ukrainian popular resistance to Vladimir Putin’s armed aggression has passed into the lexicon of European history. It has been dubbed heroic and given new purpose to Nato.

Another wave of popular resistance is surging in a different part of the world, but it does not get the same treatment.

No team of CNN or BBC reporters will drool over this band of brothers or ooze empathy as they fill bottles of Molotov cocktails and learn how to shoot guns. No British prime minister will fly over clandestinely to meet its leader. No military transporters filled with crates of Next Generation Light Anti-Tank Weapons, Stingers, and Switchblade Drones will arrive to give the beseiged half a chance against the tanks and drones of the invader.

No undercover team of Special Air Service (SAS) will be on the ground to train them.

Social media will not give its call to arms a global audience. Instead, Facebook suspends a page devoted to its news coverage out of fear of upsetting the aggressor. Instead, their resistance will be recast by the occupier as terror, and the rest of the world will stand by and wring its hands, as it does every time.

But resistance it surely is.

The flame of injustice burns as brightly in the people of Jenin, in al-Aqsa Mosque – which is now being stormed by Israeli armed police every dawn – as it has done in Mariupol, Bucha, or Chernihiv.

And that flame is well and truly alight across the whole of Palestine.

Al-Aqsa has now been stormed three times by Israeli special forces, who have been striking worshippers observing Ramadan with batons. These armed raids – which result in hundreds of injuries and arrests – are recast as “clashes” although there is no evidence that the worshippers provoked the raids by anything other than their legal presence.

The reason is to clear the compound for the arrival of religious Zionists, who are increasingly emboldened to break the ban once imposed by their own religion in praying on what Jews call the Temple Mount.

These attacks won’t be the last. Far-right Israeli activists and settler groups had announced plans to storm al-Aqsa this week in large numbers, starting from Sunday to mark Passover.

As the attacks on the mosque multiply, right-wing Zionists are turning a conflict about land into a religious war. But Islam is not the only religion singled out by Israel as the enemy. Israeli forces laid siege to the Church of the Nativity for five weeks in 2002. The world was indifferent then, as it is now.

The same fundamentalism was on show in the choice of venue to assemble the foreign ministers of Egypt, Bahrain, Morocco and the UAE – all countries which mouth support for a Palestinian state. They were summoned and duly appeared at a Jewish settlement built on a destroyed Palestinian village where David Ben-Gurion is buried.

All this was in the Naqab. For months, the Palestinian Bedouins in the Naqab had been incited by regular announcements of Jewish settlements. A Jewish armed militia was created to “reclaim the personal safety of the citizen”. In the Israeli political lexicon, Bedouins don’t count as citizens, even though they can serve in the army. The term only applies to Israeli Jews.

For a few days the security crackdown focused on Jenin, and the family of one of the Tel Aviv attackers, Raad Hazem. Israeli forces tried twice to arrest Hazem’s family, and in particular his father Fathi, and demolish their home. They were beaten back by two hours of gun fighting.

Fathi was told by Israeli intelligence officers to turn in himself and his remaining sons. Rather like the Ukrainian defenders of Snake Island, he told the officers to “come and get me from the camp”.

The next day, Israeli forces attacked Jenin again. Ahmed Saadi was killed in the gunfight that ensued. Mourning his son, his father said: “We are the grandsons of Farhan al-Saadi. We give ourselves as martyrs and we are still martyrs and we will continue the path.”

Fathi Hazem addressed the crowd in an impassioned speech calling on young people to defend Palestine and continue to rally around him and Palestinian resistance in the camp.

“We grow old and weak,” he said, while stroking his white beard. “Now we hand over the baton to you.” A retired colonel in the PA security forces, Fathi has now become a national hero. But the real significance of his call to arms is that he is from Fatah, the national movement that abandoned resistance when it recognised Israel.

Now history has turned full circle, as if the days of negotiation and proposed land swaps are over.

Farhan al-Saadi was one of the original leaders of the Palestinian resistance over 90 years ago, when the British were in charge. Izz al-Din al-Qassam, a Muslim preacher and social reformer, organised the first Palestinian armed resistance in 1935 against the British in the Jenin area.

Both were to die in gunfights with the British colonial police. But the revolt carried on until 1939, when the British promised to slow down Jewish immigration and most of the leaders of the uprising had been assassinated or arrested.

Since then, Jenin has been at the centre of battling the occupation. Pitched battles have been fought there: in 1948, when it was defended by the Iraqi army and Palestinian volunteers; in 1987, when protests erupted across the West Bank and Gaza, and Jenin held out for 60 days; in 2002, during the Second Intifada, when it was besieged, and its camp partially flattened by bulldozers, and when recently six prisoners from Jenin dug their way out of an Israeli maximum security prison with spoons.

Efforts have been made to buy off the rebellion. Tony Blair, the then Middle East envoy, and Salam Fayyad, the then Palestinian prime minister, hoped to make Jenin “an example of ‘economic peace’ to other West Bank towns” by getting the then-Israeli Prime Minister Ehud Barak to lift road blocks and stop house demolitions.

A meeting in 2008, whose minutes were leaked in the Palestine Papers, noted: “SF & TB discussed how Jenin was going very well and that Barak himself had noted that to [Condoleezza] Rice without any qualifications. Therefore, SF is optimistic that the Jenin example can be followed in other areas. TB believes there is a change in Israeli mindset after Jenin even if people don’t perceive that change yet. SF stressed on the need for Israel to change its behaviour and hopes that the Jenin example will help achieve that.”

Little of what was promised, including a new industrial estate, materialised. Today, Jenin is back to square one, back to where it was when al-Qassam won the people away from what the historian Rashid Khalidi called the “elite brokered compromise” with the British.

Fathi Hazem said in an interview after the death of his son: “Jenin has not changed and the people have not changed, because the occupation has not left. Because when the occupation leaves, the people will change and so will circumstance and the general mood. And people will live their normal lives, just as other peoples live their lives normally.

“We are a people who live under a yoke of a harsh and painful occupation that deprives us of our land, and our freedom, that killed our children and seized our properties and that is inflicting upon us on a daily basis unbearable punishment, as well as an apartheid regime, a confiscation of the land, an unstoppable settlement expansion.”

Jenin is the city that refuses to give in, but nor is it alone. The same spirit of defiance and solidarity is to be seen all over the West Bank. No Palestinian is standing by and watching.

They do this because they have no choice, no future, no national nor political rights. The conflict did not even feature as an issue in the last Israeli elections. Their sons are taken in nightly raids. They can lay down and surrender to Israeli and settler domination or they can fight back. One generation after another faces the same choice, and makes the same decision.

Ukraine shows what the west can do if it backs words of support with deeds. It has made children into heroes for playing with toy guns in the face of the Russian invader. But the same reaction by Palestinian children is considered barbaric.

Israel remains the no man’s land of western values, the place where land rights, access to a dignified life and justice have been suspended for more than 70 years.

Every settlement, every storming of al-Aqsa is an act of war by a Zionist movement that knows no reverse gear. It will lead all Israelis over a cliff.

The Arab leaders at the Naqab Summit were right to smile nervously into the cameras, because they know in their hearts this cannot last. They know that when this particular dam breaks, everything in its path will be swept away.