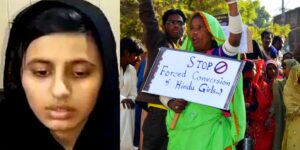 Members of the Sikh community protested for a second day on Sunday in Khyber Pakhtunkhwa’s Buner district against a Sikh woman’s alleged abduction, forceful conversion, and marriage to a Muslim man.

“Dina Kumari, 25, a government teacher, went to duty on Saturday and did not return,” Sanat Singh, a close relative of the woman told Dawn.com, adding that the family had started a search for her but it was in vain.

He said the lady’s family members, along with other community members, had gathered in front of Pir Baba police station on Saturday — in whose limits the incident happened — and demanded that police register a first information report (FIR) of the alleged incident, but the police refused to do so.

“When police showed reluctance to register an FIR, the family staged a protest outside the police station,” he said, adding that subsequently, the police had assured them of recovering the missing woman.

Today, the Sikh community again approached the police who informed them that she was recovered and she had married her neighbour, a Muslim man, in court.

“She was engaged and her marriage was planned for next month,” Singh said, alleging that she was forcibly converted to Islam and married.

Another Sikh community leader, Radash Singh Tony, claimed that the woman was kidnapped, forcibly converted and married off but the police were playing the role of a “silent spectator”.

He said that when the community members met the district police officer on Saturday night, he had assured them that Kumari would be handed over to the family, but on Sunday, the police misbehaved with the family members and did not hand her over or register their report.

Tony demanded that the government reunite Kumari to the family.

Meanwhile, Buner DPO Abdur Rasheed rejected the family’s allegation while speaking to Dawn.com, saying that the police recovered the woman and produced her before a magistrate in a local sessions court where she recorded her statement, confirming in the court that she converted to Islam and contracted marriage of her own free will and submitted the relevant documents.

He added that the court asked the police to move her to Darul Aman and provide her security.

“The case is in the court. If the court orders of to register an FIR, the police will,” the DPO added.