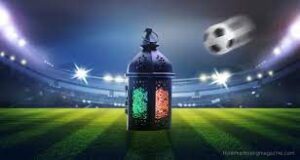 You might notice a slight change in some Premier League matches over the next few weeks.

Saturday marks the start of Ramadan for Muslims around the world, taking place for a month, ending with the celebration of Eid on 2 May.

This means of the 52 Premier League games scheduled to take place in Ramadan, there are nine evening matches in which players may need to break their fast during the game.

Last season in the meeting between Leicester City and Crystal Palace at the King Power Stadium, there was a pause in play to allow Foxes defender Wesley Fofana and Eagles midfielder Cheikhou Kouyate to do this.

What will happen this season?

The offering of prayers and reading of the Quran are increased during Ramadan, along with donating money to charity to replenish one’s spiritual wellbeing.

But the main focus is on fasting – abstaining from eating or drinking during daylight hours – which poses a challenge for Muslim professional footballers who tend to alter their training to cope with the rigours of the month.

Last season, there was an informal agreement between captains to allow a brief break at a goal kick or throw-in so that any Muslim players who needed to were able to break their fast.

This season, although there has been no official guidance given to top-flight teams as it does not affect every game, captains can again request a drinks break at an appropriate moment in the game during their pre-match meeting with referees.

Once the sun has set, it will allow fasting players to come to the side of the pitch and quickly take on liquids or any energy supplements before resuming the game.

To gain a better understanding about the basics of Ramadan, members of the Professional Game Match Officials Limited (PGMOL) have been booked to undertake a workshop led by Nujum Sports on Friday.

Which matches could be affected?

The following evening matches could have Muslim players competing for their teams while fasting:

‘Not everyone has to fast…’

The elderly, unwell and women who are pregnant, breast-feeding or menstruating do not have to fast.

Anyone travelling a distance of more than 48 miles (80 km) is also excused, but must make up their fasts at a later date, so this includes players going to away games.

Muslim Chaplains in Sport (MCS) was formed in 2014 and is the only organisation of its kind to be endorsed and funded by the Premier League and EFL, working at all 92 professional football clubs to deliver educational lectures and seminars.

Premier League clubs regularly seek Islamic guidance from MCS on behalf of their Muslim players, including regarding issues such as deferring fasts so their performances in training and during matches are not affected.

“Although there is no Islamic ruling for athletes, we provide advice on how they can keep their fasts and discuss whether they qualify for exemptions, such as when they are travelling or are ill,” MCS managing director Ismail Bhamji told BBC Sport.

“Muslim footballers come from a varying array of backgrounds and we have to find solutions that would work for all to practise their faith.

“One Premier League club asked me to talk to a Muslim player to defer his fasting during Ramadan. Islamically, he does not qualify because certain conditions mentioned have to be met and I have to be open and honest with them about the harsh realities.”

MCS works closely with the top two clubs in the country, Manchester City and Liverpool, and Bhamji delivered a Ramadan talk at Etihad Campus on Wednesday, while also praising their approach to diversity and widening their knowledge about these matters.

“City and Liverpool are performing the best and I do see the foundations laid at the two clubs,” he said. “From the academy onwards, they have the right people in place with the right mentality and vision to help the club all the way to the first team.

“[Managers] Pep Guardiola and Jurgen Klopp stand out because they are progressive and forward-thinking so I have seen improvements made at the clubs over a number of seasons.”

Wolves full-back Rayan Ait-Nouri and Everton goalkeeper Asmir Begovic were recipients of the Ramadan packs, while Derby manager Wayne Rooney handed them out to the club’s academy players

Nujum Sports, which devised the Muslim Athlete Charter that seeks to “challenge organisations to create positive change”, is once again sending out Ramadan gift packs to 270 Muslim sportsmen and women, including around 180 footballers from the Premier League down to non-league.

The packs were launched at an event in London earlier this month and contain dates, Zam Zam holy water, a prayer mat and perfume.

Nujum says it feels “privileged” to represent the Muslim community in sport and the organisation is working to “help benefit” athletes with their support.

Anti-discrimination charity Kick It Out’s head of player engagement Troy Townsend said: “Nujum have done really well to raise awareness about the Muslim community, to understand the religion and what they go through during periods such as Ramadan.

“I can see the power in what Nujum are trying to achieve and how we can work together. There are many players who identify as Muslim that football doesn’t even know about or appreciate.”