I am not living, just barely surviving. What do you'll think I should do, she asks the linkeminded. 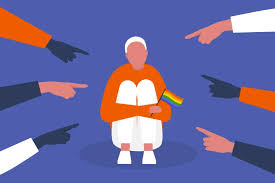 An Ahmadi gay woman in North America is terrified of her family after they threatened to kill her if she moves forward with her plan to marry a girl instead of marrying some Ahmadi man of their choice.

“I am feeling under pressure, and I dont want my dad to kill me. I have a gf (girl friend) and I want to move out and I just wanna leave Jamaat”, said a woman in her post on a Reddit forum set up to support the community of questioning Ahmadis and Ex-Ahmadis having around 2000 members. The majority of the members are from Canada and America. Under her fictitious name – Odd-Conference8725 – she made this post on Thursday last under the title of “Ahmadi gay wants to leave home, family threatens to kill me and themselves.”

Though independent verification is required to ascertain the authenticity of the allegations she made, this is a close Reddit group of Ahmadis/Ex-Ahmadis raising questions on human rights issues within Jamaat-e-Ahmadiyya and providing suggestions for victims of sexual or domestic abuse for their course of action.

Requesting helpful advice, she started off the post saying, “I am an Ahmadi gay woman and I am young. I would not go too much into details for the sake of own safety.” She said, “My family is religious and some of the people (including my father) hold very prestigious positions in the Jamaat. It all started when I was around 17. I never thought about coming out because I was too afraid of my parents and because my father hold a prestigious position in Jamaat, she said, adding that I had no problem with my family members having positions in the Jamaat until I was outed to family.

“They wanted me to marry some Ahmadi dude and send me back to Pakistan and tried to pray the gay away”, she said adding, “I moved out”. They begged me to come back and promised they wouldn’t do anything, so I decided to come back, she said. A lot has been easier than it was before but me being gay is not the conversation they are ready to have. Jamaat had their suspicions about me being gay and was also outed by a person from Jamaat. She added, “I do not believe or follow Jamaat, never did and never will but the main problem is yesterday the topic of me working somewhere came up and my father told me that I was not allowed work because Jamaat doesn’t allow people to work where alcohol is served”.

She said of her parents saying that the Jamaat would throw us out and the same old (log kiya kahengy) and it turned into a huge argument. She quoted her mother as saying that she would take the other kids to Pakistan and I can do whatever I want. She said, “I know the other siblings don’t wanna go to Pakistan”. She said of her father saying, “I am gonna show up to where you work and harass you (very low of him considering he holds a position in jamaat) and then he told me if I ever married to a non ahmadi he is gonna kill me and himself”. He said this when I was outed as well, she added. She said, “I am feeling under pressure, I don’t know what to do, I don’t want to hurt my family, I also don’t want my dad to kill me but I have a girlfriend and I want to move out”. “I am not living, just barely surviving. What do you’ll think I should do”, she asked other members of the Reddit forum, adding that any helpful advice would be great.