Naeem Khan, the journalist, got both feet injured by broken pieces of a mug which one of the accused attackers threw to hit him. All three accused namely Safeer, Tariq and Samer are roommates of Khan and asylum seekers in the Netherland for the safety of their lives. Tariq spend almost seven years in Germany but moved to Netherland eight months ago when he lost all chance to get asylum in Germany, a friend of Tariq said.

Khan told Religion Observer that he was attacked because of a difference of opinion on the military’s role in Pakistan and the ongoing unrest in Balochistan. He said it is not the first attack on him in Netherland, adding that another Punjabi attacked him last due to the same reason. He said he usually participate in live Twitter space discussion on different political matters. On Saturday night, the night of the incident, he was listening to the discussion of Waqas Goraya on Twitter space when Tariq initiated the dispute by terming Goraya traitor.

Meanwhile, according to Khan, Safeer intervened and in an aggressive tone said every traitor of Pakistan should be killed and if he finds Goraya anywhere in Netherland he would kill him. Khan said he replied that it is the Netherlands and not Pakistan where you can do whatever you want to the dissident voices. Listening to this, Safeer threw a mug with the intention to hit him but he narrowly escaped, Khan said. He said finding that he did not get hurt, Safeer took a knife to hit him and Tariq and Samer were encouraging him instead of trying to cool him down. Listening to the noise, Jawad Khan, a neighbour, forcefully opened the door and saved him. He said while walking, his feet got injured by pieces of the broken mug.

Naseer Ahmed Tahir, an official of Jamaat-e-Ahmadiyya Netherland who deals with matters of Ahmadi asylum seekers, told the RO that although he deals with these matters but he is not authorized to talk to media. The RO tried to contact Azhar Naeem, secretary of foreign affairs of the Netherland Jamaat, by call and WhatsApp message but he did not respond.

Tanveer Ahmed, an Ahmadi and a former roommate of Naeem Khan, told the RO that he spent eight months with Khan but never had any issue with him. He said he knew Tariq very well and after listening about this incident he felt ashamed being a member of the Jamaat. 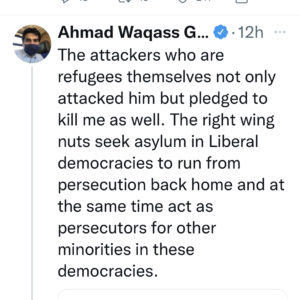 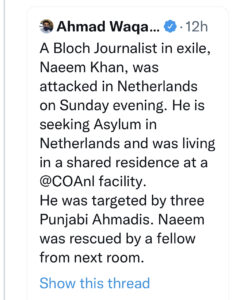 Knowing about the incident, Waqas Goraya narrated it in a tweet today (Tuesday). Although Goraya is very vocal about the equal rights of Ahmadis in Pakistan, but after this Tweet, some pro-Ahmadis on Twitter tried to accuse Goraya of justifying the Ahmadiyya persecution. There are several replies to Goraya’s tweet in favour of Khan. The reply of Saeeda Diep, a Lahore based rights activist, is worth mentioning who said the ones who face the worst kind of hatred and their graves are desecrated in Pakistan, do the same to their countrymen in the West! 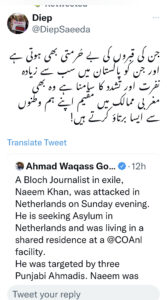 The writer studied Religion, Culture & Global Justice. He is based in Canada and can be reached by Twitter: @RanaTanver