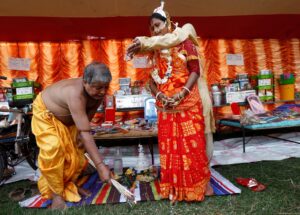 More than 10 million weddings take place in India each year, and a lot of them are over-the-top. Not every Indian wedding is a spectacle—the country is huge, and ceremonies are as varied as the religions, castes, and communities who host them. But the spectacular Indian wedding—an expensive combination of Hindu tradition and Bollywood influence—does have fascinating staying power. Through economic turbulence, social reform, modern technology, and even a pandemic, the big fat Indian wedding is only getting bigger.

Manavi Kapur: Yes, that’s right. So Hindu weddings are, in fact, not a monolith. There are, India has a multitude of religions—we have Muslims, Christians, Sikhs, Buddhists, Jains. And even within the Hindu community, weddings can be so different across regions. I have attended several, and there hasn’t been one that is identical to the other. And for the purposes of this conversation, I think the most mainstream wedding is the north Indian Hindu wedding, and it has the most cultural power over the wedding culture in India.

At the wedding, typically, there will be a henna ceremony. Then a ceremony where your families slathers you with turmeric paste. There is the main nuptial, which is when you walk around a small fire. And then there’s also the post nuptial reception. But I think lately, the most anticipated event of any wedding is the song and dance evening, which turns into like a cocktail night, which has been influenced most by Bollywood and has the most influence on Bollywood.

How did the pandemic change your idea of a dream wedding?

Manavi Kapur: So the pandemic has trimmed our guest lists down from a crazy 5,000- or maybe a reasonable 1,500-people wedding to perhaps 500. So since it’s a palace that I’m going to host my wedding at, yeah, they should be able to accommodate those many people and have enough social distancing as well. And, of course, that includes my relatives, my to-be-husband’s relatives, our friends, and I mean, yeah, their plus ones, and if we have, you know, some white friends visiting from the US or the UK. So yeah, 500 is, I think, a reasonable number.

In India overall, how much money is spent on weddings every year?

Manavi Kapur: The wedding services industry in India is roughly $50 billion. It may have shrunk during the pandemic, but even so that $50 billion figure is likely an underestimate. That’s because a lot of the industry operates informally. It includes matchmakers, wedding planners, designers, jewelers—whoever you can think of who’s going to contribute to your wedding. By that figure, it contributes about 0.5% to India’s GDP as well. And it is one of the largest employers as an industry. On average, families spend about 7.5 to 10% of their net worth just getting their kids married. Which is huge when you consider that people push themselves into loans that they cannot repay. So it is a huge expense, and one that families spend their entire lives saving up for.

We do have examples of matriarchal societies in the south and in the east where, in fact, the groom’s family pays for the wedding and is actually sort of paying the dowry for the bride. But in most north Indian weddings, I would say the bride’s family incurs the maximum amount of expenses. Now, with a little more cosmopolitanism setting in, families tend to split the expense, younger people take on loans on themselves and don’t want to burden the parents, so they end up splitting the cost between the two of them.

Do families feel compelled to put this much emphasis and attention on weddings, even if it is outside their financial means?

Manavi Kapur: Oh that’s definitely the case. In smaller towns, for instance, people take out loans that they don’t have the ability to repay. So it pushes them further down the class pyramid. Because weddings are so expensive, and because the bride’s family still takes care of most of the expenses, a female child is considered a burden, which is also why female feticide rates are very high in India. It’s improving, of course, generation after generation, but the problem still persists.

What is the Bollywood connection to the big Indian wedding?

Manavi Kapur: Weddings are driven by Bollywood, both on- and off-screen. To give a recent example, an Indian actor, Katrina Kaif, married another Indian actor, Vicky Kaushal. There was such a huge craze about that wedding, and we knew nothing about it, because they had banned phones inside the wedding venue. There was no paparazzi allowed. But, yeah, there was just so much anticipation about what she’s going to wear, who’s going to do her makeup, who the photographer is going to be, are they going to be drones, what kind of music are they going to dance to, are they going to dance to music from their own films? These are people we see on screen and then you see them on your phone screens and it’s just aspiration driving up aspiration, I feel, in a lot of ways.

There are some traditions that have been popularized by Bollywood so much that even cultures within India that didn’t follow those traditions have started following it. For instance, the karwa chauth fast, where wife fasts for her husband’s life and longevity, it used to be just a Punjabi north Indian phenomenon, but it’s become nationwide. Like people across India follow it now. For instance in this 2001 film called Kabhi Khushi Kabhi Gham there’s this whole song about it, and it’s so beautifully shot and, of course, there’s family and togetherness. So there’s a lot of soft power being wielded through that one film. So in that sense, yes. But it’s also, Bollywood takes from life and it picks up traditions which are already prevalent, and it makes them chic and aspirational and adding a little dash of designer wear, and it’s just something that you want to do, and it’s so Instagram-friendly.

What is the line between some of the aspects of Indian weddings becoming exported and appropriation?

Manavi Kapur: Bollywood is a huge influence on this international recognition because the music is just endearing. It’s something you want to dance to, it’s something that you want to look like a Bollywood star while dancing to. And, yeah, I see a lot of people using old Hindi Bollywood songs for their Western or Christian weddings. And they’re dressed in a tuxedo and a white dress, but they’re dancing to a Shah Rukh Khan song. If that’s not real international recognition, then really what it is.

But I think a lot of the ceremonies do get fetishized. And there is some amount of appropriation, especially with the henna ceremony, because a lot of people don’t understand the roots or the history of it. Which is why I think song and dance and Bollywood ceremony is the easiest thing to do, because you’re not going to offend anyone. You’re just honoring our great film industry. But, yes, there is definitely that risk of cultural appropriation.