(Pictures included in this story were taken from Jamia Ahmadiyya Canada’s website on 27 January 2022. Copies of these issues of the newsletter are taken down and no more available)

A Toronto-area Ahmadiyya missionary is facing child pornography and extortion charges in the United States and could be sentenced to 160 years in prison if convicted of all charges. Missionary Muhammad Luqman Rana is facing atleast 10 charges of producing pornography of five children and extorting them by threatening to injure their reputation for his personal gains in the United States. If convicted of all counts, he faces a mandatory term of 15 to 160 years in federal prison.

This incident is another grim reminder of sexual assault problem of the self-claimed “ethically and religiously perfect” and hierarchically controlled Jamaat-e-Ahmadiyya. Since December 12 last year when recorded audio call between the community head and one of his female relatives leaked wherein she was requesting action against her alleged rapists, different three major cases of sexual assault have made headlines. The emergence of these cases one after the other have strengthened the calls for reformation within the Jamaat in accordance with the modern democratic and secular systems. The living orthodoxifying forces of the Jamaat are resisting such calls by terming them anti-Jamaat without issuing any open statement in this regard. 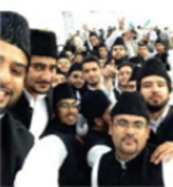 According to the U.S Department of Justice, 32 years old Muhammad Luqman Rana persuaded, induced and coerced five minor victims, residing in different areas of the US including “Maryland, Oklahoma, Wisconsin, Washington, and New York to engage in sexual explicit conduct for the purpose of producing child pornography and extorted the victims by threatening to injure their reputation.” The accused is a resident of Peace Village, where there is Canada headquarters of Jamaat-e-Ahmadiyya. Department of Justice officials say the incidents took place between June 2014 and June 2016. This was the time when he was in the final year of his 7-year-long Missionary course at Jamia Ahmadiyya Canada. The Justice Department’s office of the international affairs worked with law enforcement partners in Canada to secure the arrest of Rana in Canada and his extradition to the United States. The investigation is being conducted jointly by the FBI and Toronto Police Services. 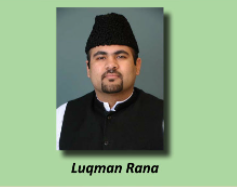 Page 9-10 of June-July issue of Jamia Ahmadiyya Canada newsletter. Introduction to Luqman and that of all of his graduating peers were published with their pictures.

According to the page 9-10 of June – July 2015 issue of Jamia Ahmadiyya Canada newsletter The Western Horizon, Rana graduated as missionary in 2015 with six other students.

The court documents regarding the case were sealed until January 26, 2022, when Rana made his initial appurtenance in the US District Court in Baltimore before Magistrate Judge A. David Copperthite, the department of justice said in a statement. In presence of the accused before the court, an assistant attorney of the Justice Department’s Criminal Division, the US Attorney for the District of Maryland, a special agent in charge of the FBI, and the chief of Toronto Police Service announced the charges.

Reportedly Canada police had arrested Rana on March 24, 2017, for extorting a teenage girl into sending him sexual photos and videos of herself. The police had arrested him after receiving information from the National Child Exploitation Co-ordination Centre in Ottawa. He was allegedly using the email address kingcheetah01hotmail.com online. According to the Jamaat sources, who requested not to be named, after his arrest in 2017, Rana was ousted from the Jamaat and later was restored and given an assignment at a Mississauga place of worship.

Jamia Ahmadiyya Canada prepares Ahmadi missionaries like other Ahmadi seminaries in Pakistan, India, England, Ghana, Germany, Bangladesh, and Indonesia. Other than some short courses, they offer main seven years program known as Shahid (The Witness). The medium of the course is Urdu. They charge no fee and offer free accommodation to the students. Only Ahmadi males between 17 to 20 and having education equal to grade 12 (Canada) with 70% marks are eligible to apply. The candidates are required to give a written undertaking of Waqf (pledge to dedicate his life for serving for the Jamaat). The admission committee sends its recommendations to the community head in the UK who gives final approval for admission. For successful completion of the program, the students are required to spend six months in the field as interns with some missionaries, ideally in some African country, and six months in the UK in the company of their community head. After completion of the program, with the approval of their community head, the successful students are awarded degrees of Shahid and title of missionary. The community head himself deputes the missionaries into different countries through Tehrik-e-Jadid. The missionaries are directly in contact with the community head and send him their monthly progress reports.

In 1985, the Ahmadiyya Community purchased a 25-acre plot of land in are that is called Vaughan near Toronto to build their Canada mission house. Adjacent to the Jamaat property, some builders started a housing society at a 50 acre piece of land. Members of the Ahmadiyya community purchased most of the houses even before the construction was completed and later it was named as Peace Village. The community was able to have some input in the municipal planning of the area and managed to name several streets of the area after its community leaders. Names of some roads and streets of the area are as Ahmadiyya Avenue, Abdus Salam Street, Bashir Street, Tahir Street, Nasir Crescent, Noor Ud Din Court, Zafarullah Khan Crescent, Mahmood Crescent, Ahmadiyya Park, and Fazia Mehdi Park.

The writer studied Religion, Culture & Global Justice. He can be reached: Twitter – @RanaTanver