Another Christian sentenced to death for ‘blasphemy’ in Pakistan 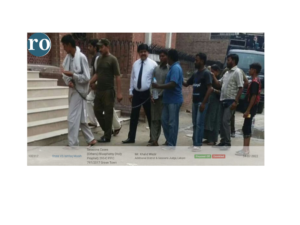 A trial court has sentenced to death a Christian man on charges of blasphemy. He has been in jail since June 15, 2017.

On 15 June 2017, Christian bike mechanic Ashfaq Masih from Mariam Colony in Lahore’s Green Town neighbourhood was accused of blasphemy after he was involved in a dispute with a Muslim customer, Muhammad Irfan, regarding payment for repairing his motorbike.

Muhammad Irfan got his motorbike fixed, but when Ashfaq asked for payment he refused to pay the full amount, saying “I am a follower of Peer Fakeer and do not ask for money from me”. Ashfaq replied that he only believed in Jesus Christ, not others, and requested the payment, telling the bike owner that he was a poor man himself and needed the money.

An argument was provoked, a crowd gathered and Ashfaq was accused of blasphemy for reportedly “disrespecting” the Prophet Muhammad by telling the motorbike owner that Christians believe in Jesus. Police were called and they arrested Ashfaq and brought him to Green Town police station.

The police registered an FIR under section 295-C of Pakistan’s notorious blasphemy laws, a section that carries a mandatory death penalty.

Ashfaq’s judgment notes the prosecution case that, “On 15 June 2017 at 12 noon, accused Ashfaq Masih while sitting in the shop was uttering blasphemous words about Prophet Muhammad & said words [that] could not be repeated.”

Concluding his judgment, the judge observed, “I am of definite view that prosecution has successfully proved its case against accused Ashfaq Masih regarding uttering of blasphemous words on a fateful day with express intention, beyond the shadow of any doubt by producing cogent, confidence-inspiring evidence and defences.”

Describing the defence evidence as “not believable”, he pronounced, “Hereby I convict accused Ashfaq Masih and I awarded him a death sentence and he will be hanged by the neck till his death subject to confirmation by Hon’able High Court.”