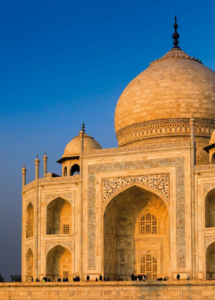 The Taj Mahal is not only the most iconic symbol of India’s Mughal emperors but one of the best-known works of art and architecture in the world. It is a lavish mausoleum commissioned by Emperor Shah Jahan, the fifth ruler of the great Mughal dynasty, to house the body of his beloved Mumtaz Mahal, who died while giving birth to their 14th child.

The Mughals were a Muslim dynasty of Mongol origin whose founder, Babur, descended from Genghis Khan. “Mughal” is derived from the Persian for Mongol and the source of the English word “mogul.” From 1526 to 1857, the Mughals ruled an empire that, at its peak in the late 1600s, was the largest and wealthiest on Earth. Mughal lands once extended from present-day Iran and Afghanistan to Pakistan and Uzbekistan, including almost all of the Indian subcontinent. The Mughals were known for their military prowess, financial and trading skills, intermittent religious tolerance of non-Islamic faiths, and love of the arts.

Over the centuries, the Taj Mahal (Persian for “crown palace”) has endured as a site of religious pilgrimage and a romantic destination for lovers. In 1983 it was named a UNESCO World Heritage site, and in 2007 it was chosen by people voting on six continents as one of the Seven Wonders of the Modern World.

The woman who would one day rest in the Taj Mahal was born Arjumand Banu Begum in 1593 in Agra, India, to Persian nobility. Her father was the brother-in-law of Shah Jahan’s father, Jahangir. Her beauty was so arresting that Prince Khurram (as Shah Jahan was then known) fell in love with her on sight. They were betrothed in 1607 and married when it was deemed propitious in 1612. Khurram renamed her Mumtaz (“chosen one of the palace”) shortly after their marriage.

Together Mumtaz and Shah Jahan travelled the Mughal Empire for 19 years. She rarely left his side and accompanied him on military campaigns, even during her 14 pregnancies and throughout his campaign to overthrow his father. Mumtaz was his confidante and counsellor, yet she did not seek political power for herself, even after Shah Jahan’s successfully secured the throne in 1628, a year after his father’s death.

Shah Jahan was renowned for his exquisite taste and for being a major patron of the arts. He was fascinated with gemology and supported the work of court miniaturists, who became famous worldwide for their elaborate decoration in the margins of their paintings and for their mastery of floral designs.

Shah Jahan focused much of his energy on architectural design, continuing the magnificent tradition of his predecessors. He completed the Agra Fort, with its distinctive red sandstone; the Lahore Fort, with its beautiful marble and tile work; the Red Fort in Delhi; and impressive mosques in Lahore and Delhi—but his most famous monumental work of them all is the glorious Taj Mahal.

Seven of the 14 children born to Mumtaz and Shah Jahan lived past infancy. Mumtaz died in childbirth when she and Shah Jahan were on a military campaign in 1631, and he never fully recovered from the loss of his wife. For the next two decades, he focused on building a timeless memorial to their eternal love.

In part because Shah Jahan was so preoccupied with Mumtaz’s Taj Mahal, the empire’s concerns were neglected. In 1658 their son Aurangzeb wrested control of the empire from his father while killing off his three brothers. He cloistered Shah Jahan in the Agra Fort until his father’s death in 1666.

Although it is not known which architect was in overall charge of planning and directing work on the Taj Mahal, contemporary chronicles do mention several designers involved with its construction. There was Ismail Khan, who had built domes in Turkey; Amanat Khan, a master calligrapher from Shiraz; and Mukrimat Khan and Mir Abdul-Karim, the chief administrators of the project, also from Shiraz. Many artisans from around the world worked on the decoration, and the materials they chose were always the finest.

No expense or political inconvenience was spared in its construction. As Peter Frankopan writes in The Silk Roads, “Gold and silver taken from the Americas found its way to Asia; it was this redistribution of wealth that enabled the Taj Mahal to be built. Not without irony, one of the glories of India was the result of the suffering of ‘Indians’ on the other side of the world.”

According to French gem merchant Jean-Baptiste Tavernier, who published an account of his travels in Persia and India in 1676, the project had more than 20,000 workers (and 1,000 elephants). The status and treatment of those workers are still hotly disputed among historians, and all was financed through heavy taxes.

Made entirely of pure white marble from the quarries of Makrana, the Taj Mahal itself took 16 years to build; the entire complex was completed in 1653. Although it drained the coffers of the Mughal Empire, the end result has become a universal symbol of India and a masterwork of universal art.

The Taj Mahal is in Agra, a major city in the northern Indian state of Uttar Pradesh. It stands on the bank of the Yamuna River, surrounded by a beautiful garden irrigated by canals. The building complex is in a rectangular area of 42 acres, enclosed by a great wall. To enter, one must pass through a monumental three-story gateway known as an iwan; this huge arched structure is built in red sandstone with marble facades.

When the tomb comes into sight, the view is breathtaking. The marble mausoleum rises on its plinth at the far end of the garden, not in the centre, as was standard for Indo-Persian tombs. Its image is reflected in a long rectangular pool the length of the garden. Flanking the main mausoleum are two buildings of red sandstone: a mosque, to the left facing Mecca; and to the right, a jawab (“echo of the mosque”), a shelter for pilgrims, perfectly balancing the layout of the whole. The mosque and the jawab are each topped by two large chhatris—canopies in the form of a raised pavilion topped with a dome, an element widely used in Indian architecture.

The Taj Mahal is famous for the exquisite harmony of its proportions. The overall impression is that each element is vital to the balance of the whole. The marble, too, produces spectacular colour changes as the light shifts: a dazzling white under bright midday sun, pink at dawn, and translucent by moonlight.

Between the vast plinth and the sandstone entrance is an immense garden, 1,000 feet wide. It evokes the Islamic paradise (Bagh-e-Adan) and once held floral shrubs, fruit trees, and flowers. In its centre, a marble pool lies equidistant from the mausoleum and the monumental entrance, flanked by an arched courtyard. The outstanding beauty of the Taj Mahal comes not only from its graceful architecture but also from its gorgeous decoration, created mainly with pietra dura (hard stone) set into white marble, a technique known in India as parchinkari. The designs are both intricate and exuberant: plant motifs, flowers, and vases (guldastas) allude to paradise, and Quranic verses adorn the walls with elegant calligraphy.

British writer Rudyard Kipling describes arriving by train to see the Taj Mahal for the first time: “The Taj took a hundred new shapes; each perfect and each beyond description. It was the Ivory Gate through which all good dreams come.” Bengali poet Rabindranath Tagore was similarly enraptured: “Only let this one tear-drop, this Taj Mahal, glisten spotlessly bright on the cheek of time, forever and ever.” It is the teardrop shed in grief by Shah Jahan for his beloved Mumtaz Mahal.