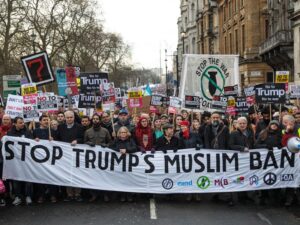 A series of surveys conducted by the Public Religion Research Institute in 2021, found that 16% of American adults, roughly 41 million people, totally or mostly agreed with this QAnon belief: “The government, media and financial worlds in the U.S. are controlled by a group of Satan-worshipping pedophiles who run a global child sex-trafficking operation.”

Natalie Jackson, director of research at PRRI said: “While these believers are racially, religiously, and politically diverse, the unifying beliefs are that their way of life is under attack and that they might be willing to resort to violence to defend their vision of the country.”

The percentage of QAnon believers was much smaller among the religiously unaffiliated (11%), Unitarian Universalists (7%) and Jewish Americans (5%).

According to PRRI, QAnon believers are mostly white (58%), concentrated in the South (44%) and disproportionately likely to believe Trump is a “true patriot” (67%); and QAnon believers are much more likely (72%) to say Islam is “at odds with American values and way of life.”

Covid-19 fears, conspiracy theory plots, and no compromise politics have caused widespread doubt about the future in America, Great Britain, Europe and the Muslim World; and has lead to “scapegoating” politics and worldwide extremist political/religious sects. Anxiety has split Americans in half  — 49 percent to 49 percent — on whether “America’s best days are ahead of us or behind us.”

This anxiety had  produced three major scapegoats; immigrants, Jews, and the religion of Islam, as can be seen in a major rise in Anti-Semitism and Islamophobia in the United States and Great Britain.

The anti-fascist group, Hope Not Hate, in their annual “The State of Hate” report, based on a survey of 10,383 Brits and conducted in July 2018; found that anti-Muslim prejudice has hardened in the previous eight years and, among far-right groups, supplanted fears of increasing immigration. Things have not gotten better in the last two years of Brexit and Covid-19 anxiety.

The British report said that thirteen percent of the British agreed that Jewish people have an unhealthy control over the world’s banking system. Almost half of people surveyed said this was a false statement, and about 41 percent said they did not know.

It is very important that parents and grandparents teach children that slandering minorities is a standard form of scapegoating. Scapegoating refers to the human tendency to blame someone else for one’s own economic, social or personal problems, a process that traditionally resulted in men blaming women who are rapped for wearing seductive clothing.

Scapegoating serves as an opportunity to publicly vent one’s own frustrations, rage and hate, while ignoring one’s own failures or misdeeds and maintaining one’s positive self-image. It is important for all members of minority groups to realize for themselves and to teach others that the victims of each hate filled scapegoater are completely innocent of all responsibility for the problems that the scapegoater has.

Do not ever let children fall for the hate virus that claims that the victims somehow brought this hatred upon themselves.

All this teaches us that everyone should be constantly reminded that religious political extremism is ultimately self-destructive to both its self and its supporters. In the words of the poet W. B. Yeats: “Things fall apart; the centre cannot hold…The best lack all conviction, while the worst are full of passionate intensity.”

Our religious and political leaders could help improve interfaith relations by constantly repeating the important lesson taught by the German Protestant theologian Pastor Martin Niemöller (1892–1984) about the cowardice of German intellectuals following the Nazis’ rise to power; and their subsequent purging of their chosen targets, one group after another:

Our religious and political leaders could also help improve interfaith relations by constantly repeating the important lesson taught by an eleventh century Spanish Muslim theologian:  “Declare your jihad on thirteen enemies you cannot see – Egoism, Arrogance, Conceit, Selfishness, Greed, Lust, Intolerance, Anger, Lying, Cheating, Gossiping and Slandering [scapegoating]. If you can master and destroy them, then will you be ready to fight the enemy you can see.” – Imam Al-Ghazali