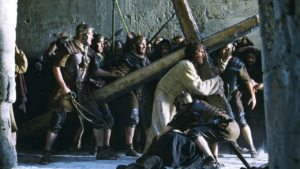 Art is subjective, but when movies like these five handle sensitive religious themes, they often provoke an onslaught of heated controversy.

Hollywood is known for making controversial films. After all, it’s almost inevitable, as films are considered visual works of art, and art is widely known to be subjective. When it comes to art, it’s impossible to please everyone. Therefore, films will resonate with some audiences, while offending others. No two moviegoers will see films in the same light. That’s because everyone is different and views films from their own unique perspectives.

When it comes to religion, we also all have our own opinions. In fact, there are over 4,000 recognized religions in the world; that’s a lot of different opinions. So, movies with religious themes are bound to spark up conversations. When it comes to making films with religious themes, Hollywood has made a lot over the years: Fiddler on the Roof, The Messenger: The Story of Joan of Arc, and Silence, just to name a few. However, Hollywood has also made religious movies surrounded by controversy, that were the subject of scrutiny by prominent Christian leaders. Today, we’re taking a look at five of the most controversial movies with religious themes to grace the silver screen and shake up outrage.

Most people, religious or not, know the story of Noah and how God spoke to him, telling him to build an ark to protect his family and the creatures of the Earth from getting destroyed in a giant flood. The 2014 version of Noah tells the biblical story but with a Hollywood twist. The story has epic battles and rock giants, creatures not found in the Bible. Following the debut of its trailer and leading up to the release of the film, many Christians were worried that Noah would portray the biblical story in a negative or overly dramatized way. Many people also questioned the intentions behind the film as its director, Darren Aronofsky, has been quoted saying he’s an atheist.

While the film release was met with mixed reviews, it was praised by Catholic priest Fr. Robert Barron: “What is significant is that Noah remains utterly focused throughout, not on his own freedom, but on the desire and purpose of God. God, creation, providence, sin, obedience, salvation: not bad for a major Hollywood movie!” Steven D. Greydanus, a Catholic film reviewer, and the creator of Decent Films said that, “Noah is not a movie for everybody, and not all Christians will want to see it. At the same time, there is no reason all Christians, as Christians, should avoid seeing it. It is a movie with notable strengths and drawbacks — one that some will find off-putting and others will appreciate.”

The Da Vinci Code is a movie adaption based on the book of the same name by author Dan Brown and is part of his Robert Langdon novel series. The film follows the adventures of Harvard University professor Robert Langdon as he follows clues to learn the hidden secrets of Leonardo da Vinci’s most famous paintings. Those clues lead him to a discovery about the history of Christianity, a discovery that rocks its very foundation. Robert Langdon learns that the Holy Grail is not a cup but refers to Mary Magdalene and her womb. In addition, Mary is the wife of Jesus Christ and had children with him, whose descendants are living among the world’s population.

As these ideas are extremely different from traditional Christian teachings, they were the center of debate. Cardinal Tarcisio Bertone, a former Vatican official, said the following in an interview: “The truth is that it spreads false ideas on the origins of Christianity to which we must answer with precise information and with a critical conscience.” Opus Dei, an international Catholic organization, said the book was dangerous fiction, lacking historical evidence: “Those who do further research and exercise critical judgment will discover that assertions made in The Da Vinci Code about Jesus Christ, Mary Magdalene, and Church history lack support among reputable scholars.”

This 2007 fantasy adventure film is based on the 1995 novel Northern Lights, which is the first installment of the His Dark Materials trilogy by English author Philip Pullman. The Golden Compass follows Lyra, a girl whose inner spirit lives outside her body and is known as a dæmon. Together, Lyra and her dæmon embark on a mission to save her best friend after he has been kidnaped. In its entirety, the trilogy is about Lyra’s quest to stop the Magisterium, a powerful church made up of the villains in the story. However, Magisterium also refers to the very real Catholic Church and “The teaching authority given by Christ to the Church,” as Catholic Answers puts it.

The Catholic Church spoke openly about their views: “Though much of Pullman’s trilogy involves… mystical worlds with talking animals and magical witches, the underlying theme is no simple fantasy. In the fictional universe of His Dark Materials, there is no real God; rather there is a high angel called the Authority, who purports to be God. The Catholic Church, frequently called the Magisterium, is portrayed as the dark force to be overcome.” The Catholic League even released a lengthy online booklet, pulling direct quotes from Pullman’s books to support their case. They aren’t exactly wrong; author Philip Pullman is in fact an atheist and has been quoted as saying, “My books are about killing God.”

The Last Temptation of Christ

The Last Temptation of Christ is a retelling of the life and death of Jesus, depicting his struggles with common human emotions: fear, doubt, reluctance, depression, and even lust. While The Last Temptation of Christ begins with the statement, “This film is not based on the Gospels, but upon the fictional exploration of the eternal spiritual conflict,” many Christians were still enraged, believing it was blasphemous to represent Jesus Christ as a mortal man fighting temptations and struggling with sinful thoughts.

At one point in the film, Jesus (Willem Dafoe) proclaims: “I’m a liar, a hypocrite; I’m afraid of everything. I don’t ever tell the truth, I don’t have the courage … I don’t steal, I don’t fight, I don’t kill — not because I don’t want to — but because I’m afraid. I want to rebel against you, against everything, against God, but I’m afraid. You want to know who my mother and father is? You want to know who my God is? Fear! You look inside me and that’s all you’ll find.” Another scene, and perhaps the one that was the most troubling to Christians, shows Jesus dying on the cross and fantasizing about having sexual relations with Mary Magdalene. The fear, the worry, the doubt, the sinful thoughts, are all extremely different from traditional Christian teachings, portraying Jesus as an imperfect human, and not as the pure Son of God, though many consider Scorsese’s film to be a powerful Easter experience.

The Passion of the Christ

As the title implies, The Passion of the Christ chronicles the final hours of the life and death of Jesus Christ of Nazareth, depicting his agony and pain during his crucifixion in Jerusalem. Catholic director and actor Mel Gibson was the mastermind behind this film, which remains the highest-grossing non-English language film, beating out La Dolce Vita and Crouching Tiger, Hidden Dragon, and the most successful independent film, according to Indiewire. In addition, it ranks 4th among Biblical stories, 5th among R-rated releases, and 79th in all domestic grosses.

However, despite being a massive success, there was some controversy that surrounded the film. First, The Passion of the Christ was considered by some to be too graphic and violent, as it shows the whipping, nailing to the cross, and the piercing crown of thorns. These intense, bloody images caused distress to many viewers, who experienced sickness or uncontrollable tears. The complaints were so great in number that director Mel Gibson decided to re-edit the movie with less violence, writing: “After the initial run in movie theaters, I received numerous letters from people all across the country. Many told me they wanted to share the experience with loved ones but were concerned that the harsher images of the film would be too intense for them to bear. In light of this, I decided to re-edit ‘The Passion of the Christ.'”

Besides the violence of the film, Gibson was also accused of antisemitism for his harsh depiction of Jews. The National Catholic Reporter said that the film shows “the Jewish leaders as a soulless mafia, the apostles and Jesus as outside of Jewish religious life, and the Jewish people as unanimously involved in eagerly seeing Jesus tortured and murdered.” While it’s been almost 18 years since The Passion of the Christ was released, there are rumors that a sequel titled: The Passion of the Christ: Resurrection is in the works. Star Jim Caviezel (who portrayed Jesus) has hinted that this new movie from Mel Gibson will be even more impactful than the first one. It remains to be seen whether it will be as controversial.