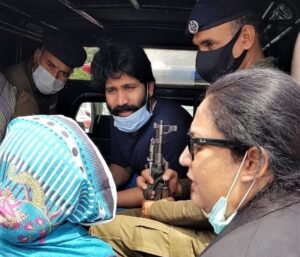 The Supreme Court has accepted the bail application of a Christian man, who faced charges of committing blasphemy, on a surety bond of Rs50,000. The court observed that the State should show responsibility in cases of blasphemy.

It added that in cases of blasphemy, it was necessary to provide protection to holy personalities as well as the suspects until the allegation was proven. A two-judge bench comprising Justice Qazi Faez Isa and Justice Mansoor Ali Shah heard the bail application of Salamat Mansha Masih, who was accused of committing blasphemy by four students in Lahore’s Model Town Park.

A case was registered against him at Model Town police station.
The suspect has been in jail since January 4, 2021. Justice Isa noted every second person rose up and accused the other of insulting their religion. The judge added that blasphemy was not a small crime and its punishment was death.

Justice Isa further observed that the incident took place in a park and no one including the guard was made a witness. Justice Shah also noted that there was a contradiction in the FIR. He pointed out that the FIR read that the suspect was a preacher whereas he was not.

“Why was Pakistan created?” Justice Isa asked the plaintiff’s lawyer. The lawyer replied that Quaid-e-Azam had said Pakistan was the testing ground for Islam. “When did Quaid-e-Azam say this? Justice Isa inquired.

The judge added that in the past, generals had attributed a lot of sayings to Quaid-e-Azam, now lawyers should not do that.

Justice Isa informed the lawyer that Quaid-e-Azam had said that people of all faiths were free for their worship in Pakistan.

“There is already a lot of division in the society in the name of religion, don’t create more,” he added.
The judge further noted that he had never come across a case where a Christian had accused a Muslim of committing blasphemy.

Justice Isa went on to ask what was the profession of Salamat Masih.
Salamat’s lawyer told the judge that his client worked as a garbage collector in the Lahore Waste Management Company.

Justice Isa wondered why Muslims did not work as garbage collectors.
“Cleanliness is half faith. The Holy Prophet’s (PBUH) Sunnah includes cleanliness but we do not follow it,” he observed.

“We should be grateful to our Christian brothers for picking up our garbage for us,” he added.