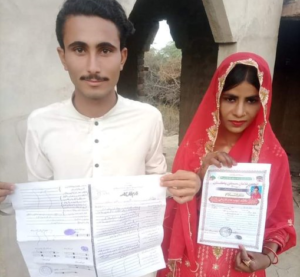 Another Hindu girl has been converted to Islam and married to a Muslim man in Tando Jan Muhammad Area of Sindh Province.

In the picture, the girl, Anita Meghwar, is showing a certificate of her conversion while Sikandar Jarwar, said to be her husband, is showing a copy of Nikah Certificate in a pose for a picture.

Voice of Pakistan Minority, a minority rights organization, in its tweet, said that it was a forced conversion and the girl was a minor meaning by she was below the legal age of her marriage. Apparently, in such cases, age is fabricated in the Nikah Certificate to prove that the bride is major and legally allowed to marry in a bid to avoid legal action.

It is pertinent to mention here that in two weeks it is the second incident of conversion of Hindu girl for marriage, which according to the Voice of Pakistan Minority, was also a forced conversion. In the first incident, 15 years old Hindu girl, Dia Meghwar, of Mirpurkhan, Sindh, has been converted and married off to a Muslim man.

On the Twitter post of the Voice of Pakistan Minority, one reply said why are these radicals targeting Hindu girls? Are they not finding brides in their community? What is the reason? Is it like these radicals forcing these minor girls to become their second, third or fourth wives?