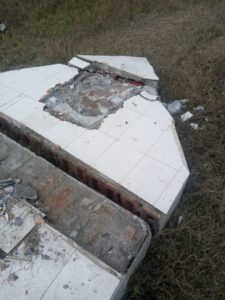 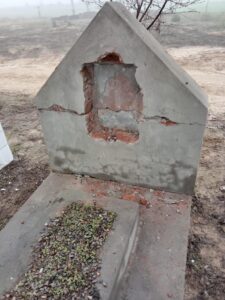 Giving in to the pressure of anti-Ahmadi fanatics, Hafizabad Police have desecrated Ahmadiyya graves by damaging tombstones of 45 graves in a mixed graveyard in the area. They have done it to differentiate them from the graves of the mainstream Muslims saying that only Muslims can right Islamic terms and symbols on their graves.

The tombstones were bearing Islamic quotes and symbols of holy places which anti-Ahmadi elements found ‘objectionable’ and got then removed. This was one of the several incidents that took place in the Punjab province during the last few years.

The local police during an operation on Friday night removed these tombstones. Anti Ahmadi elements are very active in that area and have been creating hurdles for them to exercise their religious rights. Last year on their demands, the police had removed Muslim names and Quranic words from Ahmadi houses in the area. They also moved the court to register blasphemy cases against Ahmadis but the court dismissed that petition. On November 22. The judge mentioned in his order that the graves were there for long and no one ever had any objection. He said the district administration and the police high ups to placate the anti Ahmadi elements removed Islamic terms from the houses of Ahmadis. He said however removal of Islamic terms from Ahmadi graves has been rightly refused by the police which appeared to have been continued for many years with the acquiescence of ‘Muslims’ and removal thereof would practically give life to a totally non-existent issue.

The petitioner, Umar Hayat, told Religion Observer that he had approached the court for action against Ahmadis but to no avail. He said Ata Ullah Shah, son of late Shabbir Shah Hafizabadi, took the matter and made the local police get these tombstones removed.

Amir Mehmood, a spokesperson of Jamaat-e-Ahmadiyya Pakistan, told the RO that Ahmadis are facing persecution in every sphere of life. They have no right to education, business, propagation of religion, and even the right to vote. He said they are target killed for no reason but disturbing graves of their dead is the height. He demanded the authorities to ensure the protection of Ahmadis for being faithful citizens of Pakistan.

Spokesperson of the Jamaat-e-Ahmadiyya Pakistan tweeted that “on an unethical demand of the opponents, the Police desecrated 45 Tombstones of the Ahmadiyya graves in Premkot, district Hafizabad. This graveyard is there since 1974.” He termed it an act of violation of human rights and said “it has further dimmed the face of our beloved country Pakistan in the eyes of the international community.”

Human Rights Commission of Pakistan in a statement said, “The HRCP is appalled to learn that Ahmadiyya graves were desecrated. Worryingly, such acts are becoming almost routine, leaving members of the Ahmadiyya community as beleaguered in death as they are in life. The desecration of graves is an effort to desecrate human dignity and must not be permitted. If the government is sincere in its bid to make Pakistan a more inclusive society, it must out and punish all such acts, it said.