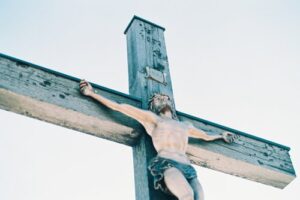 Lent is a season for penitence and preparation. But if we miss the main point of the cross, we’re left asking, Repent of what? Prepare for what?

Lent is 40 days. It began this year on March 2, will end on April 14, Maundy Thursday. I confess that as a young lad growing up in a liturgical church, Lent was little more than 40 days of ultimate deprivation: no desserts. I didn’t know Lent was penitence and preparation.

Penitence means repent, which means do a 180. Repentance is not I was sorta-kinda wrong. You don’t become a Christian with that sort of attitude. Repentance is Saul going in the wrong direction, meeting Jesus, seeing he was flat-out wrong and doing a 180. That happened to me at age 18. I met Jesus, repented of my sin, did a 180.

That was almost 50 years ago. My first 30 years in the faith were spent in faith communities based on 18th- and 19th-century evangelicals. We didn’t practice “thick” liturgies, so we didn’t know Lent was for Christians to repent and prepare. Repent? Aren’t we the people of God?

That was Israel’s problem in Hosea’s day. They were the people of God, but the nation of Israel at that time was mistaken in making her ceremonies and temple — things that are good, true and beautiful — the main thing. That’s one definition of idolatry.

Idolatry is making something the main thing — when it’s not the main thing. C.S. Lewis highlighted this in his 1943 sermon, The Weight of Glory. He warned that the things we long for — good things — will betray us if we only see to them, not through them to the main thing. These good things become “dumb idols,” Lewis said. Idols blind us.

Israel was blind to her idolatry. She didn’t see through her good things — temple, rituals and so on — to the main thing, how she was betrothed to God, “married” to him (Hosea 2:19). It’s why, in forgetting the main thing, Israel had become an adulteress.

Adulteress? Yes. Only a married woman can be an adulteress, and Israel was married to God. The Lord drove this home by having Hosea marry a prostitute named Gomer. But as Hosea’s bride, Gomer kept sleeping around, committing adultery. Israel was doing likewise.

Ok, what’s this got to do with Lent and repentance?

The answer lies in this question: What do you see when you look at the cross? Different people see different things. During my first three decades in the faith, I would have said Jesus as Redeemer. Or King. Or Savior. These things are good, true and beautiful. The apostle Paul certainly saw these things as well. But he saw through them to the main point of the cross of Christ — the love of a bridegroom for his bride. He saw the main thing, Christ betrothing us, “marrying” us. I didn’t see this for 30 years.

Then — some 20 years ago — I was making way through the Book of James. He describes unrepentant Christians as adulteresses. Whoa. Adulteresses? We’d have to be married to Jesus to be adulteresses. I began to look at the cross and ask, Have I made something — like substitutionary atonement — the main thing when it’s not the main thing?

Whoa. That would make me idolatrous. That would mean I’m blind. Woe is me, to quote the prophet Jeremiah. I would need to repent, do a 180.

And let’s face it — idolatry is a strong word. Nobody likes to be called idolatrous. But the fact of the matter is we can turn any good thing into an idol. Our family. Our kids. Our career. Our intelligence. Our church. Our popularity. Our wealth. Our success.

We can even make an idol out of how we see the cross of Christ.

So here’s an offer. During Lent, I’m going to unpack a remarkable book I recently stumbled upon: “Jesus the Bridegroom: The Greatest Love Story Ever Told.” The author is Brant James Pitre. His writing reminds me of Einstein’s axiom: “Everything should be made as simple as possible, but not simpler.” Pitre makes the marital gospel as simple as possible.

If you love simple, straightforward exegesis, you’ll love Pitre. He sees Scripture through ancient Jewish eyes — the church was Jewish for her first 300 years. He draws on early church fathers as well as Orthodox, Catholic and Protestant writers — his work is commended by all three traditions. When it comes to the cross of Christ, he makes the main thing the main thing. I’ve already read this book twice — it’s that good.

So, if you’re drawn to good news — and this is really good news — the marital gospel tells us why penitence and preparation is central to Lent. I hope you’ll discover what I, a late bloomer boomer, began to discover 20 years ago.