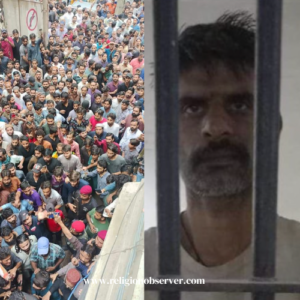 A Hindu shop sweeper has been arrested on allegations of blasphemy in Cantt Police area of district Hyderabad on the demands of hundreds of charged protesters.

Cantt Police have registered an FIR under section 295-B of Pakistan Penal Code and arrested Ashoke Kumar accusing him of insulting the holy book of the Quran. Even after the registration of the FIR and subsequent arrest of Ashoke, a large number of protesters gathered outside the police station demanding the police hand them the accused so that they can deal with him in their way, which could be his lynching. However, the police placated the protesters, led by the local Islamic leaders, and ensured them exemplary punishment of the accused. 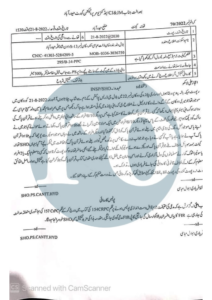 It is worth mentioning that the complainant, Bilal, was not certain that Ashoke insulted the Quran. In his application, Bilal said “some unknown two accused one of them can be Ashoke” may have insulted the pages of Quran”. Bilal is not certain if there was one accused or they were two, let alone he is certain of Ashoke being involved in this alleged incident. However, the police arrested Ashoke giving in to the pressure of the protesters.

According to the application of Bilal, he did not witness the incident as he was not on the place of the alleged occurrence. He said he is a shopkeeper at a neighboring Rabi shopping plaza, where the incident was reported. He said knowing about the alleged incident, with some other people he reached the plaza and found Ashoke cleaning a shop there. He said him being Hindu, he asked him if he burnt the pages of the Quran. Ashoke could not give him a satisfactory answer at which he believed he was involved in this incident. He said he hold Ashoke and handed him to the police.

Journalist Mubashir Zaidi tweeted, “Police claims the sanitary worker was targetted because of a personal clash with a local resident”. 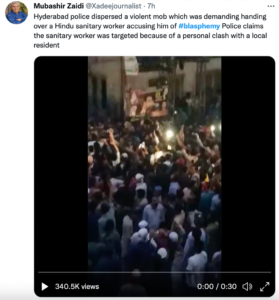